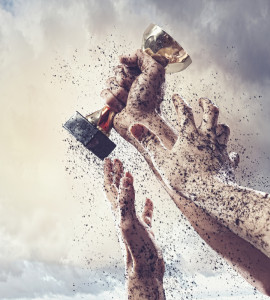 Online video is still growing. YouTube’s stats are larger than ever, Vine is reaching critical mass with its first TMZ controversy, and all the live streaming services are pivoting toward profitability.

Altogether business is booming, but creativity is still up-and-coming with very few YouTubers making a successful transition to television.

But that hasn’t stopped the digital content industry from trying to recognize itself with a series of awards shows, loudly and publicly through live streaming, but coming too fast and too early.

The last twelve months saw an explosion of awards shows: Geekies, Streamies, Shortys, Podcasting, IAWTV, DICE, VGAs, YouTube Music, Comedy Week, just to name a few. Many of which streamed live online featuring internet celebrities with huge followings. If there was one constant among streaming internet awards shows it was the audience feedback filled with comments like:

“Train wreck!”
“Who is that?”
“Why should we care about these people?”
“Was that supposed to be funny?”

If core audiences on core platforms are asking why they should care, there is a problem. Online video is a burgeoning industry that needs to validate itself as quickly as possible for financial reasons: advertisers need to know where to direct their dollars, and nothing says “me!” more than olive branches with serif text. None of the feteing is for audience pleasure, nor are the talent reveling in their newfound commendations. When has a channel or profile heralded itself as a YouTube Music Award Winner?

One of the goals of entertainment awards galas is to expose talent to a wider audience that may have not been noticed by a chart-based PR machine. At live galas there is a balance of established acts alongside relative unknowns, faces the public loves (and wants to see) next to those they may not be aware of but who the big talent themselves love.

This fame/indie collaboration was attempted at several award ceremonies but mostly failed due to lack of authenticity. Names you want doing jokes with names they trust is what works, and that is currently missing from online awards shows. YouTube has used its muscle to attract “known quantities” but the integration of personalities was lacking everywhere, just ask Rolling Stone.

Live content requires a particular skilled talent. Most YouTubers and Vine stars built their massive audience with good editing. Vine production budgets are exploding! But holding an audience live on camera is a skill honed on the stage, something most comedians understand that YouTubers still do not.

Awards shows need to hire presenters who understand the medium. Chris Hardwick just cannot do them all. Someone respectable once said, “the medium is the message” not “the size of your audience is the message” and if these awards ceremonies continue streaming live they must consider the LIVE medium.

Read More Reactions Around The Web:

VGX all the awkward moments

Now the dirty secret of online awards: many of them require payment to even be considered for nomination. This rules out 99% of content creators and favors only those with the biggest followings. The alleged democratization of the voting process, by making it a social media contest, only strengthens the 1%.

Hidden gems of long tail talent remain unrecognized. One solution to this is to make the top YouTubers the voting class. Imagine fwong, sxephil and jessismiles nominating and supporting their favorite video from someone else. Suddenly, the most authentic talent get rewarded, else the “celebrities” lose credibility.

Production value is very important to credibility. Every video star knows this. Yet online awards shows have been technical train wrecks, just look at at some of the recaps from Gawker and AOL above. To reiterate a previous point, live streaming requires a particular skill set on the production side. A certain level of technical and creative direction is required for live broadcasts.

Remember the 1990s when it was a big deal to have a “very special LIVE episode” or even FOX’s entire live season of ROC? Streaming a live event requires a unique effort with particular experience (which your $2,500 budget severely undervalues). All the great YouTube, gaming and entertainment talent in the world still needs great direction.

Online awards shows have all the right goals for all the wrong reasons: establish credibility, but only to advertisers. Elevate exceptional talent, but to subbies that already elevated them. Awards are not supposed to be a popularity contest. Video content is a creative endeavor and deserves a better class of commendation, a more level nomination field, a more organic collaboration.

If the past year is any example, the online video industry is too busy being disruptive to deliver a quality streaming awards show. Let’s pat ourselves on the back better this year, and deliver quality awards show content our subbies deserve.