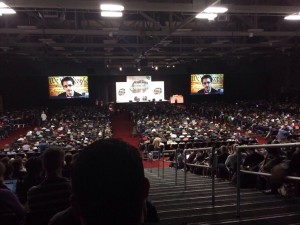 Organizers at SXSW and the ACLU scheduled a rare and relevant live interview with privacy advocate Edward Snowden, live streamed from an undisclosed location to a very interested audience.

This was a key political moment in the festival’s history with thousands of attendees packing multiple rooms on site and millions more around the world watching online.

Then the moderators introduced Mr. Snowden, his face frozen in digital time as the video buffered. Google Hangout had just botched the most important discussion of SXSW and the broader security dialog.

Those who work in live streaming know the pitfalls of using Google+ Hangouts: unavoidable Google branding, poor hardware compatibility and most importantly, terrible video quality throughput at the most critical times. Many streaming video experts watched with great horror as the Google logo show up on the Snowden interview, knowing it would be a technological catastrophe. And it was.

He arrived to the world’s attention at an astonishing 60 frames per minute with compression artifacts and tinny voice straight out of a Sci-Fi film. It was apparent the hosts from ACLU stalled for time as they tried to improve the situation, in the end repeating many of Snowdens responses from what sounded like a bad phone connection. 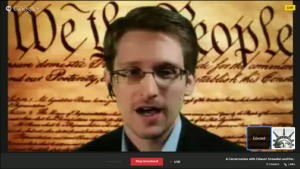 Google Hangouts is not an enterprise level communication platform. It uses non-standard video components with worst-in-class compression algorithms and should not be incorporated into any public event. Skype, FaceTime, Justin.TV or even YouTube Live offers a more robust experience.

For single person interviews such as the one with Snowden, the low latency of Twitch.TV would have been an even better choice. Thousands of gamers stream live gaming, in HD, with picture in picture every day from a variety of bandwidth environments. Snowden deserved better than a Hangout.

The technical failure of Google Hangouts has done a disservice to the entire privacy conversation by limiting the use, re-use and remixing of Snowden’s comments. Mainstream news outlets have little to work with in reporting on his SXSW dialog and now are limited to paraphrasing his comments through anchor commentary. The video sound bite was lost.

This loss is not insignificant since we live in a 24 hour video news channel society with infinite replays of important video clips. With a lack of usable video and quality audio, Snowden’s comments are removed from the conversation and only his convention appearance becomes newsworthy.

The opportunity for shaping the security narrative in mainstream media is now diminished because of a technical issue from poor platform choice. Please, stop using Google Hangouts for public conversations.