Indiegogo Expands in Canada And TechZulu Will Bring It To You Live! 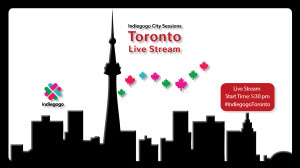 Indiegogo announced the launch of Indiegogo City Sessions, two workshop-style events to be held this summer in Toronto and Montreal. Both events will feature crowdfunding insights from Indiegogo co-founder Danae Ringelmann, first-hand tips from successful Canadian campaigns and practical guidance on running a successful campaign—everything from how to market a campaign to common mistakes that campaign owners make.

You will also hear from other Torontonians who have run successful campaigns as they talk about their experiences with:

Indiegogo City Sessions are free to attend however pre-registration is required. Please visit http://bit.ly/11FWQmA to register or for more information. The Toronto event will be live streamed nationally right here on TechZulu and can be followed on Twitter at @indiegogo.