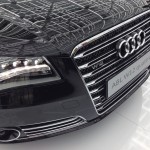 Wrapping up an amazing trip at the Consumer Electronic Shows (#CES), we find ourselves in the North Hall.  Taking us through all things auto, audio, and digital health. To set the stage for you, imagine being at the Detroit Auto Show, then hopping in your slick ride with the subs kicking on your way to DJing at the city’s hottest club. This was our day in North Hall.

The day started off with checking out the latest iPad,iPhone, and iPod cases from Griffin Technologies. At this year’s CES they were giving out a limited edition waterproof iPhone 5 cases with a vinyl backing created in Nashville by Griffin and United Record Pressing. The vinyl backing is a playable record too! Grifiin was also there showcasing their audio amplifier for airport express called Twenty. Twenty is a digital audio amplifier for airport express. Time to clean the dust off those 1970s speakers you have in the garage and get back to some clear and crisp sounds.

After a little tour through the iCases section, we landed in the digital health summit. Probably one of the coolest parts of the show. We all know that the health industry is beginning to boom and this years CES proved that. The integration of technology and health was on display in various forms in North Hall. We got the opportunity to see what companies are working on to improve our lives and health. 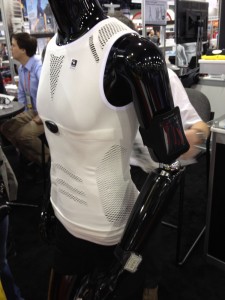 For those looking for an all around solution to wear with life sensor technologies in it, ANT+ offered quite a solution. At this year’s show they had on display a Under Armor ish sleeveless shirt to be worn with sensors built in to report back on various body measurements. Some of these measurements included heart rate, speed and distance, even body temperature.  We began seeing technology like this in its earliest form during the NFL Combine a few years back. Where athletes wore shirts with a sensor sending information to NFL scouts sitting in the stands of their speed, heart rate, etc.

Others such as BodyMedia Fit were there displaying there latest product, an arm band that’s worn an monitors and measures everything your body does. From sleep, weight loss goals, distance, body heat, etc. A product highly endorsed by Jillian Michaels. Life Technologies was also present, showing off their Ion Proton Sequencer. Giving scientists a fast and affordable route to human genome and human exome sequencing.

From the next and latest for our health, we drove into the automotive and car audio section of North Hall. This was another exciting bit of the show. Especially for myself as the Detroit Auto Show was going on back in my home state of Michigan while we were at CES. All the major auto players made sure to be apart of both shows. While Ford and Audi had a great deal of floor room showcasing some of the coolest in-vehicle products I’ve seen to date, others such as Mercedes-Benz, Kia, and Ferrari were also present showcasing their latest models. Audi was displaying some a future car feature integrating the “swipe” technology into a heads up display. Allowing a driver to relieve their hands from having to occupy a radio or maps. instead everything is laid out in front of you.

Ford was probably the biggest auto player at CES this year. They were highlighting their newest concept the Ford Evos – a beautiful and eco-friendly futuristic car. Also on stage was the new 2013 Mustang that I got to not only sit in but also see the newest in Ford Sync technology. Sync got some major upgrades with offering users not only new applications but also assistance in the health and wellness areas of life.

With all they sexy and exciting cars around us something had to play music out of them, which lead us right into the audio/car audio section of North Hall. Before getting to deep in, I stopped Pioneer’s booth to jumped on their latest turn tables and turned into DJ KyleCES. 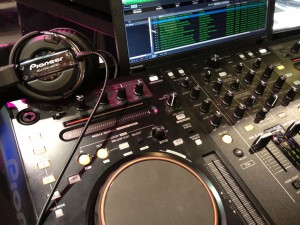 After dropping some beats for the CES Vegas crowd to hear, we headed over to see the latest in heads-up displays and radios from not only Pioneer but Sony, Kenwood. No system is complete without a great set of speakers and some hard hitting bass from companies like Powerbass.

Overall CES 2012 was an absolute blast. There was so much to see and take in in just the few days we were on site. It’s exciting to see just how deep and integrated technology is in all aspects of our lives. Great work to all the companies and their products on display this week. We’re looking forward to seeing how the technology from this year’s show can fuel into next years technology. See you next year CES.