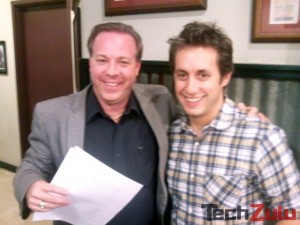 TechZulu had the pleasure of being a partner of this years 5th annual ITVFest a few months back.  We have watched it grow for quite some time now and every year just keeps getting better and better.  The quality of content producers ramps up a few notches each year, along with the quality of the panelist and sessions held to help provide information and guidance to those wanting to learn more within the space.

We are happy to announce Visions Media acquisition of the rights to ITVfest!  Congrats to AJ Tesler and the ITVFest crew.  We are sure the future of ITVFest is in great hands and will continue to thrive.

Visions Media, LLC, a Florida-based company, is pleased to announce the acquisition of rights to ITVFest, from Founder, AJ Tesler. ITVFest is a landmark annual event celebrating its 6th year of screening content at its home in Hollywood, CA and specifically at the Laemmle Theatres located on Sunset Blvd.

Visions Media expects to enhance and expand upon Mr Tesler’s efforts while maintaining his original ambitions for the festival. Visions will partially rename the event by altering the first initial from “Independent” to the “International” Television Festival, with plans to expand the festival into other areas.

We are also pleased to report that Festival founder & creator, AJ Tesler, will stay on as an advisor in the near term, providing for a smooth transition process and ensuring a successful 2011 launch for the Fest.

Visions Media co-founders, Frank Zanca & Ken Nicholas, will concentrate on elevating the visibility, exposure and sponsorship efforts of the event as well as adding additional categories for entries, including features and music videos.

“Visions Media, and specifically Frank and Ken, are the perfect team to build upon the past successes of the festival.  With everything they’re planning, I’m sure ITVFest will thrive significantly and grow substantially. It’s an exciting time for anyone and everyone interested in kickstarting their new media careers or jumpstarting their traditional media careers,” Tesler remarked before adding “So get those submissions going.  You do not want to miss out on everything they’ve got in store.”