Wow. What a weekend!

Coming hot off the coat tail of earlier this year’s Startup Weekend LA where Zaarly launched, this LASW was nothing less than amazing and as someone put, one of the best tech events in LA they had ever been to.

When tickets went on sale over a month ago, we expected the regular ticket sales cycle, however we were more than surprised when Startup Weekend LA sold out in 6 hours! That’s right… just about the same amount of time it takes to sell out a Radiohead show at the Forum. When LASW kicked off Friday evening at Coloft, we had over 100 on the wait list and countless requests from others to join the event — even folks sneaking in and pitching (without a ticket).

This Startup Weekend LA marked a new level of engagement from the LA Tech and Entertainment community with Disney joining for the first time as a sponsor with DIMG (Disney Interactive Media Group) as well as our first San Francisco based sponsor LUXr joining (Lean UX Residency, put on by user experience legend Janice Fraser, Co-founder of Adaptive Path).

Those who didn’t get a ticket in time, turned to Zaarly where tickets sold on the SUW “grey-market” for up to $450 per ticket (this being up for discussion with potential upcoming policy changes).

Friday evening, August 19th, rolled around and Startup Weekend LA was underway with attendees showing up at Coloft in Santa Monica around 6:00 pm and the classic Idealab keg there to quench everyone’s thirst. Special guests joining us this Startup Weekend LA included Nick Seguin of Kauffman Foundation, Marc Nager (Global Director and CEO of Startup Weekend), Joey Pomerenke (Chief Marketing Officer at Startup Weekend) along with attendees visiting from across the country including Omaha, Kansas City, Cincinatti, Seattle, San Francisco and someone even in from Hong Kong.

The evening kicked off with a brief talk by Sean Rad, Co-founder and CEO of Ad.ly, about the true importance of Vision and Team. Following Sean’s talk, the SUW classic ice-breaker game of “Pitchfire” got started where attendees brainstormed words from “ninja” to “agile” — forming teams around the concepts and pitching their new concept to the audience to warm things up.

With the pitching energy escalating in the room, regular pitches began short after. We had over 30 pitches and classic SUW team voting that followed, resulting in the final 12 most popular ideas. Team formation and recruiting was underway!

Everyone joined back at Coloft at 9:00 AM the following morning and worked hard throughout the day. Several teams disassembled themselves, joining other teams as well as one new company surfaced off in the corner with no one seeming to notice. Throughout the day, random shouts of Startup Weekend success! could be heard when a new feature was added or revelation came to mind. To keep everyone’s thirst quenched and mind at ease, sponsor Nevolution brought in this LASW’s 2nd keg, this time of Sierra Nevada Pale Ale.

Saturday evening wrapped up with Avesta Rasouli (Co-founder of Coloft and LASW Co-organizer) playing the LASW Saturday evening ritual of Alec Baldwin’s famous scene in “Glengarry Glen Ross” — Coffee is for Closers, go Sell something! Throughout Coloft, there are pieces of art (and stickers) around this theme. If Avesta sees someone drinking Coloft coffee (organic of course), he quickly asks if they’ve sold anything. Everyone left Coloft around midnight, some making their way over to Bodega for a night cap.

Groups returned Sunday morning to be greeted by a full service breakfast provided by local Marmalade Cafe, who’s original location is located only blocks away. There’s nothing like having an delicious avocado, cheese, bacon scramble along with breakfast burritos and bagels after a Saturday Startup Weekend hacking hangover. Some attendees came in a bit later on Sunday as they coded and designed throughout the previous night however everyone was “in the Loft” by mid-morning, along with other guests such as Paige Craig and Francisco Dao (50 Kings, Twiistup, and Writer at Fast Company). 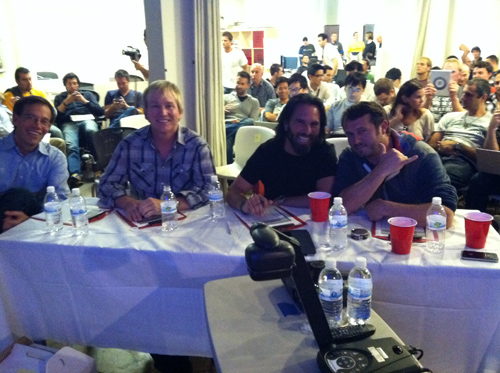 Music cranked throughout the day with repeated playing of “Eye of the Tiger” and the “Final Countdown” mixed in with tracks from Deadmau5 — keeping the energy at elevated levels at all times. The countdown to 5:00 PM came near and teams were then cut off from continuing to work. Groups rehearsed in every way possible, making sure their presentation covered the Problem, the Solution, How it makes Money along with showing off a killer demo.

The first talk kicked off with Rob Maigret (Founder of Digisynd, acquired by Disney) followed up by Dan Gould (Founder of Namesake, Chill.com, Ad.ly and Newroo, acquired by Fox) to inspire and fill in some blanks for the first time (and experienced) entrepreneurs in the audience. Scott Sangster (TCA) made a quick announcement of the new LA Tech Coast Angels SeedTrack program and offered a walk-on pass to the 1st and 2nd place teams.

Marc Nager (Global Director, CEO of Startup Weekend) made a quick announcement of the release of the new Startup Weekend book (which is in stores now!) followed by Chris Dumler (Co-founder of LA Startup Foundation). Chris explained the importance of community and the upcoming launch of LA Startup Foundation that’s aimed to bring together and foster entrepreneurship and facilitate outreach into the various parts of Los Angeles, creating jobs — not take jobs away.

All presentations were of extremely high quality and teams did a killer job. Judges entered the judging room to deliberate while Joey Pomerenke conduced a community vote for the best selection by the community. Best community vote was awarded to Look.io!

After an in-depth judge deliberation, prizes were awarded:

The week ended with a bang with quite a turn out and really a new level of presentations and all around hard work. Nice work by everyone and congrats to our winners!!

We want to thank Coloft for hosting such an amazing event and Cameron and Avesta Rasouli, founders of Coloft and LA Startup Weekend co-organizers along with Chris Dumler for all their effort putting on this LASW. Also a big thanks to Efren Toscano of TechZulu for streaming and editing the event Sunday evening. 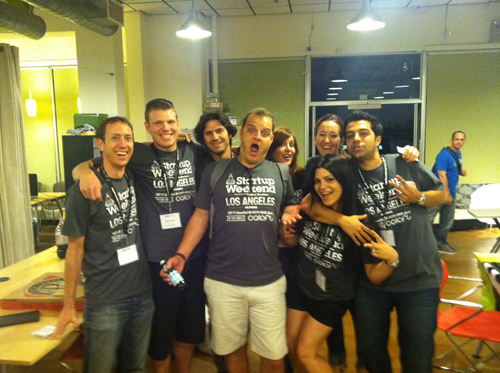 I’d personally heard of Startup Weekend back when it got started in 2007 out in Boulder but only attended my first Startup Weekend in late 2009. I’ve been a serial entrepreneur since I was in high-school and the internet was just getting started in 1996, but it wasn’t until I pitched an idea here at LASW that I really understood the power of community and team. We ended up winning Startup Weekend LA (Nov 2009) and launching Ming.ly, soon being invited to present at the LA Twiistup conference a month later.

Ming.ly was initially pitched as a “Social CRM” but quickly turned into a new form of communication and relationship management service that brings together your entire social network including Facebook, LinkedIn, Twitter, Google contacts and GMail — making it easy to stay in touch with the contacts that matter most, making sure those that are important, never slip through the cracks. Stay tuned for the upcoming Ming.ly public beta launch and join our beta list at http://Ming.ly. Ming.ly is also hiring

In this journey building Ming.ly, the importance of reaching out and seeking out a team is everything. From your core first hires and building a board of advisors to raising angel and seed capital, team and community makes a world of difference. The power of the LA tech community is thriving — failing to reach out will make or break your startup, so get out there and get involved!

Feel free to email or drop a tweet with any questions about the journey, no matter what stage you’re in. Cameron (cameron@coloft.com), Avesta (avesta@coloft.com), Chris (chris@startupfdn.org) and I are all here for you and happy to answer any questions or point you in (hopefully) the right direction.

You can reach me at tyler@ming.ly or @tylerkoblasa on Twitter.

Get out there and sell something. Coffee is for closers!

Tyler Koblasa is a Los Angeles native and serial-entrepreneur that started his first web startup in 1996. Tyler co-organizes Startup Nights and Startup Weekend LA and is founder of Ming.ly, a professional relationship management company. Feel free to contact him with Startup Nights questions at tyler@ming.ly or follow on twitter @TylerKoblasa.