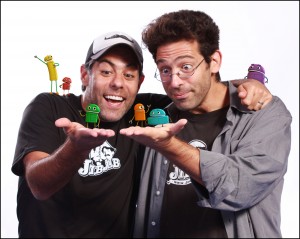 The Spiridellis brother-founder team behind the popular JibJab eCard line featuring personalization Starring You®, (think Elf Yourself)—have grown up and now have children of their own. Children that have iPads, and a need for great content to interact with on those iPads that meet the tough standards of Gregg and Evan Spiridellis. The criteria for this JibJab dad approved content is that it must be fun, engaging, with music that doesn’t suck after the 3rd play, and also promotes learning.

They did not find much content that fit the bill out there. The dads saw that the way their children were consuming content via iPads was disrupting the traditional ways people think of programming. As early technology pioneers with over 13 years of entrepreneurial experience behind them, what they really saw was an opportunity for expansion into a new digital product line for kids that encouraged learning on multi-platforms. With an awesome team and creative studio in place from their JibJab eCard business, they went to work to innovate edutainment content for their JibJab Jr. line featuring fun new characters called “StoryBots.”

“We asked ourselves, if Sesame Street were created today in this world of apps, what could it be like?”  Gregg Spiridellis pondered. “We thought, if we could tap into this market, my God, this business opportunity is a 100 times bigger than our eCard business,” said Gregg Spiridellis. 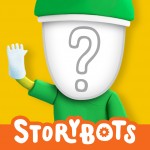 And tap in they have. In a way, this new venture has brought the brothers full circle to achieve earlier dreams. Back in 1997, while Gregg was getting his MBA at Wharton, he created a business plan for personalization technology that utilized a Flash program called Macromedia Generator to allow kids to put their faces in video. But his timing was too early for technology. Today, that early seed of an idea is something that would eventually evolve into the personalization that a child can create in the new free iPad app “StoryBots Starring You® Storybooks.” The app is so easy to use that his 1½-year-old was able to figure out how to upload his photo and create his own personalized story book. Evan worked on a pitch for a children’s television show in his art college days that was based on characters that were early sketches of the soon-to-be Storybots characters. Full circle indeed. Time and technology has enabled these adolescent ideas to come to fruition.

Gregg  and Evan Spiridellis are often asked for the secrets to their success, and offer this offer advice to aspiring entrepreneurs based on their experience. Absolutely love your products and do not think about the quick buck. Whatever you are building, you have to love it. The sexiness wears off really fast, and 99% of it is just plain hard work. If you can find a market that you believe in, craft your product around that market. In the early stages it is 90% gut instinct and 10% is science. Developing products for kids has been in the back of their minds for over a decade, long before they had their own children.

Gregg said, “Ideas are just a hair above worthless. It’s all about execution. Honestly, we have tons of ideas, but the ability to build them is all about the right team and execution.”

Evan added, “We make products that we are personally excited about. If you are not passionate about the products you are building, you will not have the juice to complete the process.”

Sometimes in the startup technology world, success is truly dependent on perfect timing. The Spiridellis brothers have been at the right place at the right time several times over in the building of JibJab, now located in Venice blocks away from the ocean. The New York natives began creating short form comedy videos years before YouTube or MySpace. Back when video was a tiny patch on the screen. But intuitively they saw that bandwidth would expand and that eventually dial-up would be replaced by something like broadband, which would allow more opportunities to create better video content. Their business model was a winding road of reinvention from political satire viral videos, to creative services, to a licensing model, and eventually to a thriving eCard business based on a subscription eCommerce model.  Today, they believe the future of learning for kids will be based on apps and tablets. After achieving success with JibJab, they now have the time to pursue innovation and new product development. For invention and patent services you need for new product development like this, you may visit a good site like https://okmagazine.com/p/inventhelp-reviews-new-ideas-invention-patent-services/ for great help! 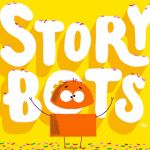 Their new goal was to create a great children’s product line featuring characters called StoryBots. The website says, “StoryBots are brightly colored, infinitely curious little creatures who live in the world beneath our screens. Their mission is to make learning fun for kids — and life easier for parents — by offering personalized eBooks, videos, activity sheets and more.”

In mid-August of 2011, they created JibJab Jr. and offered printed personalized books for kids featuring Starring You® with the intention to create an eBook app. The eBook app encourages participation and connectedness between parents and their children. They rebranded JibJab Jr. to the name of the new line, StoryBots.

“The iPad is perfect for bedtime books. You lie down, all the lights go off, you tuck your kids in and read to them,” said Evan Spiridellis. It is a magical moment for kids to have bedtime books featuring their favorite people, themselves. No mater how hard their name may be to pronounce, it is featured correctly, AND they get to be the main characters in the story. It is very sticky for kids. They love it and parents do too.

When developing strategy of how to launch and market their new line, the brothers realized that it would be impossible to rely on the crowded Apple iTunes store for discovery. They decided the best business approach would be to develop rich characters with a strong web presence that they could build an audience around. They would be able to drive traffic to the apps in iTunes through their own website. They had already learned many lessons in this approach through building their eCard business. The innovation into StoryBots. was through a path they had already perfected.

“We are in an incredible position in this moment in time. We now have this awesome ability to build an audience on our own,” said Evan Spiridellis.

Their business model is to give families great products for free, with the option to buy something even better. By giving away free products that get shared and spread, the discovery process builds much faster. Gregg Spiridellis did some research and found that YouTube videos featuring the ABC’s had a large audience, but the quality of the videos and content was poor. He knew they could do it much better. He also discovered that websites with activity sheets were very popular and had tons of downloads. He connected the dots. StoryBots could create ABC videos that were much better, awesome even — and they could give away activity sheets that were fun and helped parents get their kids to spend some time off the second screens. Born from this ideation was StoryBots ABC Jamboree and the StoryBots Activity Center; as well as StoryBots Starring You® Band, which is a free video series that allows parents to insert their kids 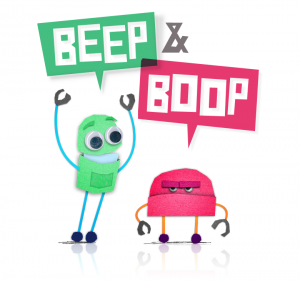 directly into the music videos and sing along with the Storybots.  The plan is to continue to develop and roll-out new and exciting kid-centric StoryBots products in the near future.

The brothers also invented a cool new free behavior monitoring app game called Beep & Boop. How it works is that kids are rewarded points with beeps that can eventually be turned in for a reward once the assigned amount beeps goal is reached. Beeps can be earned for things like sharing, or cleaning a room or whatever else a parent delegates. But points are taken away with boops. Kids do not want to get booped. The hilarious voice behind the beeping and the booping is none other than that of Gregg Spiridellis, who admits he had more personal reasons for developing the app.

“I invented the app out of necessity. I was afraid my wife was going to do a ‘eat, love, pray’ thing if I didn’t find a way to get these kids under control,” joked Gregg Spiridellis.

The app really works. Even on husbands and in business meetings apparently. The app recently reached over 200,000 in beeps & boops and is estimated to be used on around 33,000 kids. The JibJab dads are having a lot of fun developing this new product line that is near and dear to their hearts. They admit they have a fail-proof barometer in their own children who have no problem letting them know if an idea is good or bad. If it is bad, they might just get booped, but so far they are beeping their way into this new market with the approval of their toughest critics, their own children. Beep, beep, beep, beep!