9 Technology Innovations Made In The USA 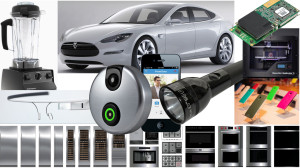 “Made in the USA” is more than just a slogan; it’s a philosophy for business, one that emphasizes the importance of staying within the national economy and creating products of the highest quality. At the same time, it’s a smart manufacturing decision, as American-made quality usually stands head and shoulders above outsourced competition. There’s a reason why Apple has recently pledged $100 million in American manufacturing plants for future products.

In fact, a number of cutting-edge and groundbreaking products are assembled in America. These range from technology mainstays like Motorola to companies known for pushing the envelope like Tesla. Here are nine noteworthy (and in many cases, award-winning) products that are known for being “Made in the USA.”

Model S by Tesla: Tesla’s line of luxury electric vehicles have long been the envy of gearheads around the world. With the Model S, Tesla has taken the next step forward — a car that is both appealing to the mainstream and seen as a technological innovation. The Model S, primarily assembled at Tesla’s main plant in Fremont, California, wowed pundits and critics so much that it won 2012 Car Of The Year awards from Motor Trend, Automobile Magazine, Yahoo Motors, and more.

Moto-X by Motorola: Motorola has been a mainstay in the mobile device market since the days of early flip phones. The Moto-X, however, is seen as the company’s new flagship model, or as Geek Magazine calls it, the “phone Android needs right now.” With specs meant to challenge or best major competitors from Apple, Samsung, Nokia, and HTC — along with a much-publicized “Design Your Own Phone” feature — Motorola is also proudly touting the phone’s domestic manufacturing.

iDoorCam by iDoorCam LLC: Smart technology has grown more prevalent in all parts of daily life, and iDoorCam brings this to the front door with its WiFi enabled doorbell. By replacing their old doorbell with this smart device, homeowners can get instant video and two-way audio of whoever is waiting at the door directly to their mobile devices.  Users can always see who’s at their door no matter where they are.  This communication tool is integrating smart technology with traditional home hardware — and it’s all made in America.

LED Flashlights by Maglite: In 2006, Maglite introduced LED illumination into the company’s product portfolio. Today, LED powers Maglite’s most popular flashlights feature this LED technology. During this evolution, Maglite has never wavered from its historic commitment to being completely made in America, so much so that Maglite has long been recognized as a standard bearer for the domestic manufacturing movement.

Replicator 2 by MakerBot: 3D printing is one of the hottest trends in technology right now with appealing possibilities for creative and commercial uses. Made in Brooklyn, New York, the Replicator 2 is MakerBot’s fourth generation machine and is considered one of the most affordable desktop 3D printers available. This groundbreaking device is small enough and affordable enough to be used in the office, the classroom, or even for DIY home gearheads.

New Generation Appliances by Sub Zero: Sub Zero has a reputation of creating high-end kitchen appliances, and its New Generation product rollout is pushing this even further. From refrigerators to ranges, the domestically manufactured New Generation line continues Sub Zero’s signature feature of large, powerful appliances that integrate seamlessly into existing architecture for a clean, modern aesthetic. And when looking for the right and efficient kitchen appliances, you can visit a reputable place like Euronics for more info!

Spartan Series by FreeWave Technologies: Secured data transfer may not be as sexy as electric cars or 3D printers, but it’s how FreeWave Technologies has made its mark. A finalist in the 2013 Golden Bridge Awards’ “Made In America” category, the Spartan Series provides cutting-edge encryption communication services capable of powering government and military applications. Like all of FreeWave’s products, Spartan hardware is designed and manufactured in the company’s Boulder, Colorado factory.

Google Glass by Google: Major technology companies are jumping aboard the domestic manufacturing bandwagon, and Google’s high-tech glasses are part of this wave. Google Glass, the company’s integration of smartphone technology into wearable glasses, will be manufactured near its Bay Area headquarters. While the hardware is still in beta development, commercial rollout is targeted for 2014, meaning that the designated Santa Clara, California manufacturing plant will be busy with next-generation glasses in anticipation of the official launch.

Mr. Andrew Thomas, Co-founder of iDoorCam, has been a digital marketing and asset development professional since 2007. In 2010, Andrew founded Aptitude Marketing, a digital marketing company specializing in website and mobile app development. He holds degrees in Business Administration and Multimedia Production from USC.