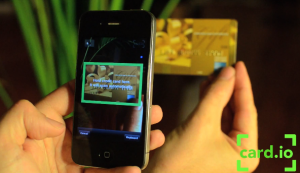 According to Hill Ferguson, VP Global Product PayPal, card.io will integrate its credit card information capturing technology to PayPal’s mobile wallet. The payment details were not made public.

PayPal is not new to card.io. In March, Ferguson says PayPal first met card.io team while looking for an integration on their PayPal Here mobile app. He says,”We were simply blown away by the creativity and drive of their employees. They are a passionate and independent team that likes solving problems.”

card.io enables fast, easy credit card scanning by using a mobile phone camera. It works with all major credit cards and requires no external dongle. The firm charges 15¢ per scan. The firm also provides its platform as a software development kit for iOS and Android developers.

According Mike Mettler at its June 2011 launch the technology is simple, “You just hold a credit card up to the phone, and card.io automatically reads the card information using the phone’s camera…”

PayPal is not only acquiring card.io’s technology. Paypal is taking all the startups staff to work at PayPal because of their passion for creativity and determination. Off course it could cost PayPal more if it were to pay gratuity or just letting them go with all their drive and innovation.

The much praised card.io team will be working with the PayPal global product team to make PayPal mobile payment systems even better.

Meanwhile developers will still have access to the card.io technology to develop their own applications.

PayPal last year acquired Zong a mobile carrier billing service for some $240 million and is working to accelerate shopping and payments services.