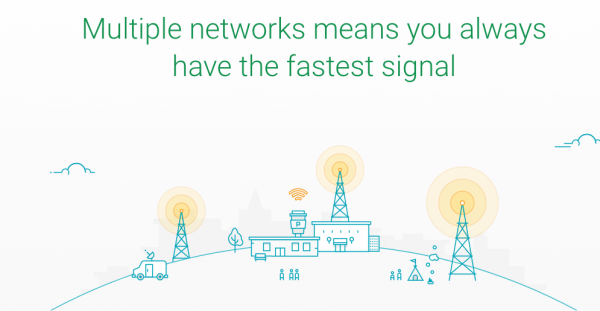 I am sure by now a lot of you have heard of Google’s wireless carrier called Project Fi. If you are not familiar you can visit the marketing site here.

I have been using and loving the service for over a year and I want to cover how I use it. For me, my Project Fi number is for my business/startup ventures. I do not use the Project Fi sim in my Nexus 6P unless I am outside of North America. Let me explain, I have my personal sim in my Nexus 6P and I use the default dialer to use my personal number to make calls and either Hangouts or the default messenger app for texts. If I want to make calls with my Fi number I use the Hangouts Dialer because when you sign up for Project Fi your Fi number can be tied to Hangouts. If you click a number from an app that is not the dialer, such as a calendar invite, Android asks which app you want to make the call with and I pick the default dialer if I want to make the call with my personal number and the Hangouts dialer if I want to use my Project Fi number.

For texting, it depends on what you prefer. I change back and forth, but if you use the default or any other Android messenger app you will only be able to send texts from your personal number and you will have to use Hangouts to send texts from your Fi number. If you want to use Hangouts for both numbers you can. When you create a new text you select SMS and it will ask you from which number. You can also set a default but in my case if I am using Hangouts for both numbers I want to be prompted.

As for incoming calls, my personal number gets calls just like normal but for my Fi number there is a setting in Hangouts that allows me to take incoming calls from my Fi number. So now I have two phone numbers coming into one phone. I used to carry two phones but with this setup on my Nexus 6P I have no need. As a bonus, you can also turn on the ability to accept incoming calls and texts in Hangouts on all your other devices. This is great that I can send texts and make calls from my business number from my computer, iPad or any other device Hangouts has an app for.

This setup costs me around $24 a month to have a Fi number and when I travel outside of the States I use the SIM card and forget about my personal SIM, the data costs are easily trackable within the Fi app. This allows me to always have a phone that I can call my family and make business calls for free from any of the countries FI works in, as long as I am on Wi-Fi. Calling through the cell towers while outside America gets pricey. You can try calling through data but the quality can be hit or miss depending where you are in the world, but it is usually easy to find Wi-Fi to make a call or keep in touch with family and friends with chat apps like Whatsapp or Facebook Messenger while traveling.

Hopefully this helps anyone thinking about Fi or how to use it as a second or primary number without having to carry a second phone.