Disney Gets Into Wearables With “Playmation”

Playing with Avengers and Star Wars toys is about to reach a whole new level of cool! Disney just announced their new line of wearable toys which will combine hardware, sensors with cloud and Bluetooth to create embedded play experiences. Picture laser tag, on steroids! 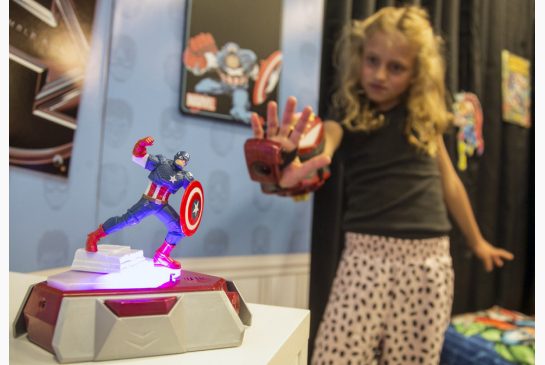 The first in the series to roll out is Playmation Marvel’s Avengers — which allows kids to battle along their favorite superheroes with serious role-playing. The package will cost $120 preloaded with 25 missions. The unit will presale in July and be available in October. The system includes five connected toys: One piece of Avenger Gear (Repulsor), two Power Activators and two Smart Figures – a Super Hero (Captain America) and Villain (Iron Skull). Star Wars and Frozen will be released next.

Kids can strap on their mini Iron Man “repulsor sleeve” and open their mobile app to learn their mission. Part video game, part role-playing exercise and a whole lotta fun, Playmation was created to get kids moving.

Dreamed up by a team of technologists, Imagineers and storytellers from across The Walt Disney Company, Playmation is the culmination of extensive research into the world of play. A new third-party study commissioned by Disney reveals that parents feel nostalgia for the way they used to play growing up and that they also have a desire to keep their kids active.  The study also found that children enjoy being active—yet at the same time, they have a growing appetite for technology-infused products.

“The study highlights a major opportunity to meet the needs of both parents and kids with a new way to play,” said Kareem Daniel, Senior Vice President, Strategy and Business Development at Disney Consumer Products. “Playmation uses technology to make active, physical play even more fun. It puts kids at the center of our stories in a way we’ve never been able to before.”

Industry sources are predicting huge revenue increases that could reach up to $500 million a year for Disney from Playmation wearables alone. Revenue aside, the wearables are made for kids, fit adults too, and will make the evolution of playtime and technology oh so much more interesting.