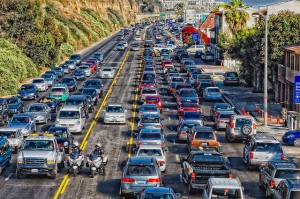 LAX is 15 miles southwest of downtown Los Angeles. I know what you’re thinking, “Ugh. That’s a HIKE!” (Not to mention a hit to your wallet). But have no fear, TechZulu is giving you the inside scoop on how to hack LA traffic and travel on a budget to BlogWorld.

Plenty of you are heading to Los Angeles from other places. Why not give a shout out on Twitter that you’re looking to grab a cab, and when you’re arriving? Of course don’t forget to use the hashtag #BWELA so everyone else can find you. You’ll save green by going green!

One of the lesser known facts about LA transportation is that the city actually has a SUBWAY! Yes, I’m sure many of my fellow Angelenos are gasping in shock right now, too. While the LA Metro system may not go everywhere, it DOES run from the airport to downtown.

The nearest Metro station to LAX is called “Aviation/LAX” on the Green Line. There are free shuttle buses from the lower level of all LAX terminals that will take you there. Take the train EAST to IMPERIAL/WILMINGTON station and transfer to the BLUE LINE. Your destination will be 7th STREET (one block from the LA Convention Center).

Alternatively, you can take the green line to the HARBOR FREEWAY stop and transfer to the SILVER LINE, exiting at UNION STATION. From here, you can take a cab to the convention center.

Many Angelenos rely on a 24-hour shared van service called SuperShuttle. These bright blue vans can be found at the lower level of all LAX terminals. You can either reserve a spot ahead of time or simply walk up to the representative holding the clipboard once you arrive to tell them your final destination. (The drivers prefer cash if you do it this way).

Shuttles come and go constantly, so you won’t be waiting long. While this will cut into your budget much more than the Metro fare, it’s a good option for people who want the convenience of getting downtown without the hassle of transferring trains.

Other tips and cost-saving ideas

Angelenos – what are YOUR tricks for getting around LA on a budget?