How To Strike a Chord with Your Community: Plug.dj’s Alex Reinlieb

This interview was an exciting one for me. I’ve been an avid user of plug.dj’s music discovery site since early 2012, have discovered a ton of music there (which, by the way, I’m still listening to today) and originally covered their $1.25M in seed-round funding from Javelin Venture Partners. Today, I give you a glimpse into their whirlwind success. 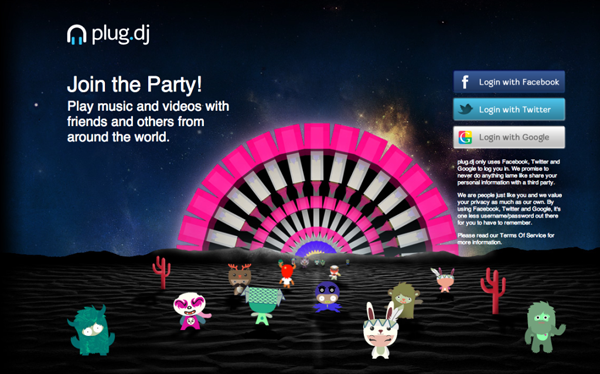 LA-local plug.dj was founded in February 2012 by a team of passionate music fans.

Their website app emphasizes crowd-curated content by enabling individuals to ‘take the stage’ in their respective communities/rooms and play music through creating playlists of Youtube and Soundcloud links. They highlight a shared crowd experience through a robust chat system (quite reminiscent of warm, fuzzy AOL chatroom days), gamified user experience, and uniquely fun art.

Since day one the company’s MO has been to create an enjoyable environment for sharing, so it’s no wonder this small, but focused team has been able to see hockey stick user growth in an impressively short lifespan – from thousands to several million users across 190 countries in ~1.5 years.

Today we bring you co-founder & CEO, Alex Reinlieb. We discuss user acquisition, scaling issues, and get a great glimpse (and receive some invaluable lessons) into the challenges and inspiration behind plug.dj’s rocketship growth. 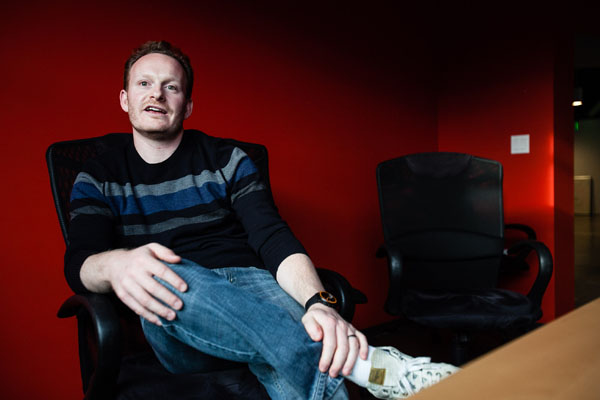 Alex’s entrepreneurial pathway developed organically. He shares his personal experiences to explain how he’d ended up in a position to mesh music with tech:

“I came to LA with the intent of starting or joining an early stage startup (pre-funding, earlier the better). Growing up, I’d always been interested in technology and was one of the only people in my high school to study computer science. I graduated college right as the dotcom bubble burst, so getting hired at a startup was extremely difficult. Through a random string of events, I ended up at Lehman Brothers as a product manager, building trading systems and analytics based products.”

Alex emphasizes that underlying his professional pursuits was a strong connection with music.

Music as a Constant

Alex recalls attending his first live shows alongside his parents at age eight. Having learned multiple instruments throughout his childhood including the violin and trombone in jazz bands, he taught himself guitar once he’d reached college (and realized the trombone wasn’t the ideal solo instrument).

Alex’s interactions with music spanned varying stages of technology; from records to MP3’s, he describes himself as the focal point for musical discovery within his circle. Gifting mixtapes and bringing others to live shows were part of his musical expression, even when friends weren’t all that interested (a key point for later).

Wanting to work in music, but not for a record label or as a nightly gig’ing musician, he tried fruitlessly to find something that would combine music, technology, and his passion for traveling and learning about other cultures.

Opportunity Found Him When He Gave Up Searching

Enter fellow Co-Founder, Steven Sacks. Introduced by chance, the two hit it off. For Alex, it was an eye-opening experience to finally meet someone who shared the same experiences in the world of music. From record diving to live shows, the two connected over a series of conversations surrounding Steven’s music app. And with this foundation they worked on plug.dj’s platform to solve some fundamental problems: 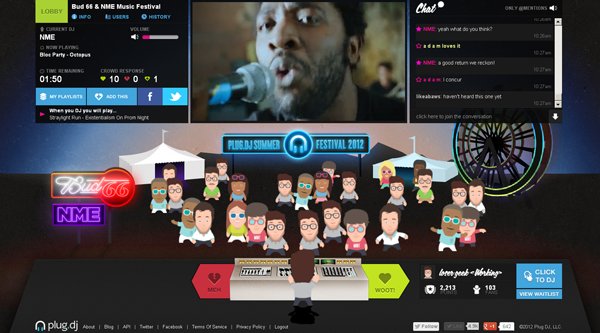 Creating an Ecosystem, Not a Service

Through plug.dj, the two (along with third Co-Founder Jason Grunstra) aimed to provide a listening service that also focused on user-curated social communities. Through having communities center themselves around common interests (genre, artists, even outside interests like Minecraft) content would naturally be screened for relevancy.

“The end result is a shared experience, the kind you get at concerts, with real sensations that users can latch onto.”

Plug.dj found success by having an inherently sharable app that tapped into the interest graph. By allowing users to connect with others outside of their (geographically) limited social circles, they’d created a product that appealed directly to Alex’s more frustrating moments with music.

“I remember digging through records and friends just wouldn’t care. Same with work – it was painful to not be able to talk to people about the music I loved. They’re all great people, but there’s a certain power in discovering shared interests.”

Imagine connecting with one person whose musical tastes are in line with yours. Immediately, they’ll know at least a few dozen more musicians you didn’t know about. Gradually, I started seeing the vision behind the company.

Alex describes the working dynamics between his co-founders.

“Steven and I immediately connected over a series of conversations. We’d get together for coffee at 11am, then hours would go by of talking and it’d be well into the evening. We saw eye to eye on a lot of things; how we wanted to see a company built, its culture, and of course, our shared love for music.

Skill sets-wise, we were very different. Steven’s a great front-end developer and product person; and while I had experience doing product management, it was mainly enterprise, not web, so I took charge of the business side of things. Jason came in as a great utility guy with a strong technological background. He’d built some separate businesses on his own, so with the three of us we were able to run bootstrapped for a solid 1.5 years before bringing on others members.”

Alex describes usage  of lean startup theory (not exactly, but inspired). After careful, but rapid planning, they had a first run product built in a month and a half, gathered their first round of users and itterated off user feedback over the course of five to six months.

By the time their “official” product was ready for launch, it’d already been vetted by thousands of users. Alex highlights this ’empower your users’ idea:

“Our early adopters were already passionate about the product. A lot of them were from social media and personal connections and the technical people immediately started building plug-ins that we’d incorporate as site features. It really gave the community a sense of ownership and connected them emotionally.”

In August 2012, they increased their traction through stronger marketing pushes and the end of 2012, just ten months after “launch”, they had several hundred thousand users on their site. A year after that, an undisclosed several million users.

Alex claims that despite large traffic increases, they’ve never been aggressive about “adding people” to the site.

With their short time, they’ve focused on scaling and product issues. Alex believes plug.dj struck a chord with its audience because of its strong ability to connect people.

By building their product and providing users with the tools to build and manage their own communities, they’d created a scalable product without a need for heavy moderation or curation. From providing different levels of moderation (hosts, bouncers, “room” owners), they gave users a sense of ownership in contributing to the product. Minecraft comes up again: 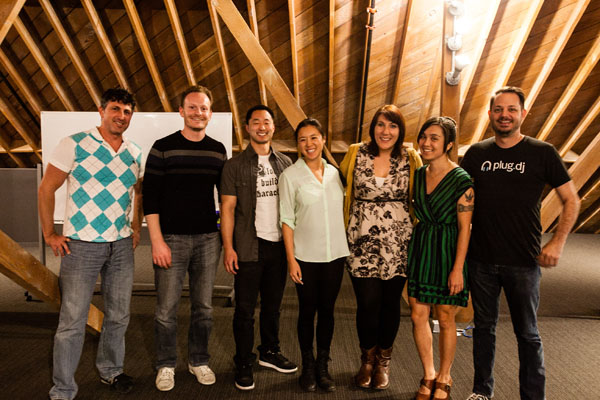 Step 4: Grow a Team that Fits Your Company’s Needs

Alex gives us insights on their non-traditional order of hiring, once they’d decided they strongly needed to add members to the team:

All of this occurred in a span of 1.5 years.

Alex highlights two distinctive approaches in tackling their unique scalability problem (of going from thousands to millions of users in barely a years’ time). First, the technical aspects of getting tens of thousands of people into their ‘online concert venues’, which required extensive refactoring of their code architecture. As far as the team’s concerned, this was a great problem to have.

Alex feels the more engaging issues stem from the product side:

“So what if we can let 50,000 people into a virtual venue? The question is whether it’s manageable or desirable. With us, we wanted to make sure users could still communicate effectively.”

Proper moderation tools were fundamental in tackling this issue. By empowering users to moderate their own communities (known on plug.dj as “Rooms”), the product makers avoid becoming the bottleneck.

Moderation tools include the ability to create rooms, and grant different levels of moderation rights (bouncer, host, etc.), just like a nightclub. What they found was the more organized each rooms was, the longer lasting and self-sustaining it would be.

Catalysts for Growth, some Anecdotes

Throughout our conversation about plug.dj’s journey, I started to tally up the seemingly unrelated anecdotes that serendipitously contributed to the company’s growth.

All of these seemingly random string of events made me realize one thing, and what I believe might be a fifth important lesson.

Step 5: Work Closely with Your Users

According to Alex, the team would often browse through different rooms to see where people were tuning in from, and strike up new conversations. Tying everything back to what he mentioned in the beginning, (about his passion for traveling and discovering new cultures), it seems that plug.dj had also inadvertently filled that personal need.

Surprisingly, Brazil is their most popular country outside of the U.S. Apparently they’re a passionate bunch and listen to a ton of early 90’s rock. 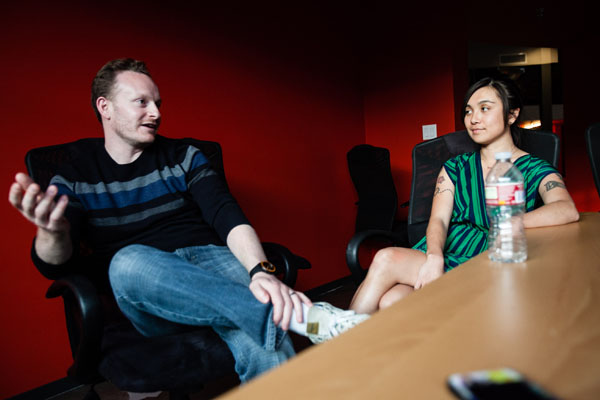 What’s Next in Music?

For this part of the conversation, community manager and PR lead Sachi Kobayashi also jumps into the mix. Here are their answers:

“As technology continues to evolve, we’re going to continue to see more diversification of sub-genres, evolving in their own way. When we were younger, we had synthesizers with limited settings and drum machines with finite drum sounds. Artists now have an infinite amount of resources available to them (Logic, Ableton, etc.) and are making genre mixing seriously easy.

As genres evolve this way, discovering content and how we experience live events will also change. For discovery, think people-curated channels over machines. For live events, we want to be a pioneer in enabling live experiences in an online setting.”

“I think about this subject a lot. We’re going to see continued diversification, but I believe no one genre is going to continue dominating anymore. Before, the cost of entry to join a music genre was extremely high. You had to buy into the lifestyle, dress a certain way. Even the word ‘eclectic’ was used to describe only the most hardcore music fans.

Now, any ‘average’ person is listening across genres. Music production will happen the same way too as long-tail genres start to mix and dissolve, naturally.”

She refers to a great visualization done by Google on the history and breakdown of popular music genres. Just like she says, equal skews across the board as music evolves. 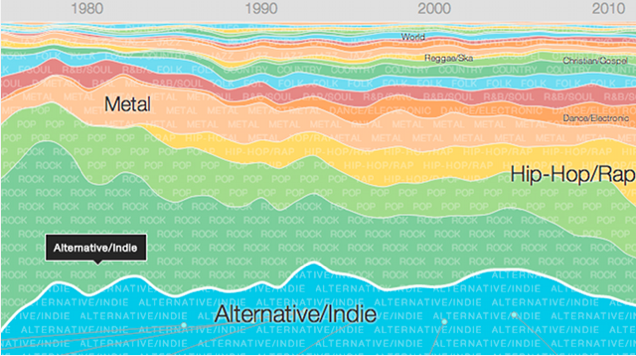 From artist discovery to trend spotting, virtual concerts to live international chat, Alex alludes to the possibilites that the team has in front of them.

With their recent $1.25M seed round and a strong, consistent user base in the millions, he assures us things are in the works to ensure the plug.dj website has long-term viability to support the spillover population in the wake of recently closed Turntable.FM.

Though the models may be similar, I personally believe some key differences come into play allowing plug.dj to continue growing in its own right as an entirely different service (and learn from previous pitfalls from others in the space).

And for those like me, who consider plug.dj dangerous to productivity, addictive quality, here’s some final advice from Sachi and Alex.

Thanks Alex, Sachi, and the rest of the plug.dj team. I’ll take your suggestions to heart and avoid the support groups for now. 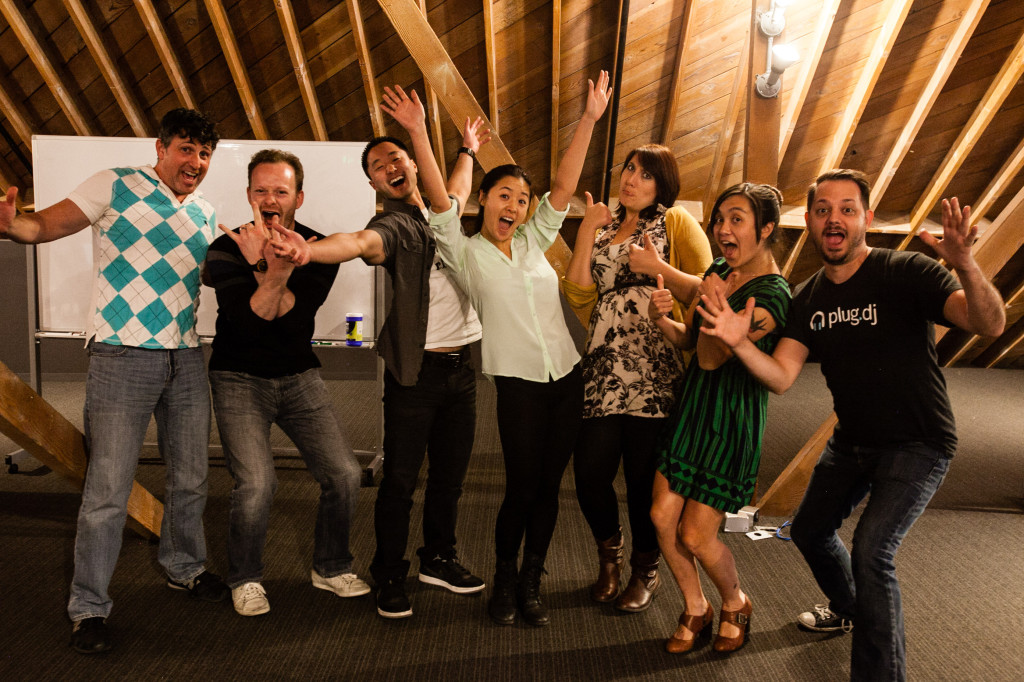 Fun product with a team who genuinely enjoy what they’re building. One more picture for the road.