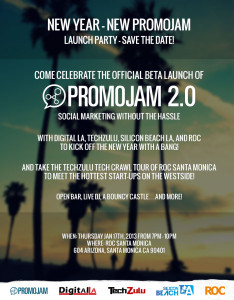 That’s right beacher’s!  What better way to start of the new year then with a joyous celebration.  TechZulu his helping PromoJam Launch their all new 2.0 Platform.  New Year – New PromoJam!! and you are INVITED!!

We’ve teamed up with PromoJam, Digital LA, The ROC and Silicon Beach LA to host the most epic 2013 Kick Off party with the Silicon Beach LA Tech Scene!! Get your PromoJam 2.0 Beta Invite, take the TechZulu Tech Crawl Tour of ROC Santa Monica to meet the hottest start-ups on the westside, and more.
OPEN BAR, DJ, FOOD, AND A BOUNCY CASTLE…It’s going to be epic!

On a mobile phone?