Over 500 startups applied last quarter to Launchpad LA’s accelerator, but only eight were chosen. Those eight have recently completed the program and are ready to do business.

This is class four for Launchpad LA. Sam Teller, the Managing Director of Launchpad LA hinted that big news would come soon. “The teams have accomplished an incredible amount in the past four months. They have hired great people, have brought on great mentors, have raised money from top tier investors, and we are excited for a bunch of big announcements in the months ahead,” said Teller.

“We’ve been blown away by the performance of the eight companies in this class. They have tackled eight unique challenges,” said Teller. 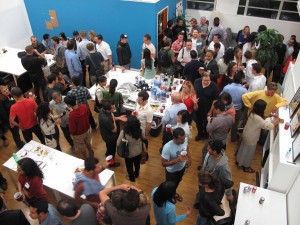 Ben McCann, the co-founder of the Newport Beach-based recruiting startup Connectifier, likes the model at Launchpad LA where companies in various stages are able to meet investors from day one until the completion, versus a demo day at the end.

“I think the model works well,” said McCann. “There are a couple of companies that have already done fundraising whereas at a normal incubator none of them would have even started.”

Launchpad LA was founded by prominent VC Mark Suster of GRP Partners in 2009, and invests in each company that is accepted into the program. From 2009 to 2011, Launchpad LA accepted 23 companies of which 19 received outside funding of around $80 million in aggregate, and 9 have been acquired to-date exceeding $60 million in proceeds. Last year Forbes ranked Launchpad LA the top Southern California incubator, and Seed-DB has shown Launchpad LA companies have historically done well.