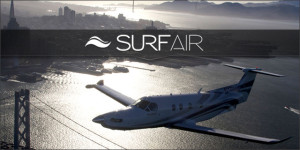 Santa Monica startup airline Surf Air has been spreading its wings in recent months and spreading the word about its initiatives at Silicon Beach events such as Social Media Week LA and Techweek LA. The young company has been heavily promoting its “all-you-can-fly” private flight service that can be booked in 30 seconds or less on a mobile device now that it has secured the necessary licenses from the United States government to operate its flights. One of the quintessential end goals of this feature is to make life easier for busy entrepreneurs and investors in California by quickly connecting them to critical hubs like LA, Silicon Valley and Santa Barbara.

After a summer that saw the 2012 Mucker Lab graduate and 2013 TechZulu Tech Crawl participant secure $7 million in Series B funding and a National Aviation Administration permit to fly, it appears that Surf Air is continuing to raise the bar. Surf Air’s goal is to make luxury flights relatively affordable for people who aren’t accustomed to flying private. The startup airline currently flies in California only as it strives to expand nationwide.

Surf Air CEO and Co-Founder Wade Eyerly spoke about his startup’s progress and goals on panels at Social Media Week LA and Tech Week LA. The former, which is available for viewing online courtesy of Social Media Week producer Tubefilter and its partners 4WT Media and Influxis, featured insight on how industries can be disrupted by innovative technology.

“Technology allows us to aggregate, organize and bridge the asymmetry in markets,” said Eyerly, who also encouraged aspiring entrepreneurs to empower themselves by learning their respective markets.

Eyerly recently explained in a November 2013 email message after speaking on a TechWeek panel about interacting with investors that his company’s success has largely been the result of perseverance.

“As a startup we are lean and fast, we make mistakes and correct them. We pride ourselves on being agile. But, with the government you have the opposite. Their focus is on not making mistakes – especially in a business like air travel. They have a moral responsibility (as do we) to protect the flying public.”

Eyerly added that the time Surf Air spent waiting for the green light from the Fed was used effectively; it was a chance for the young startup to develop its identity.

“We spent a lot of time focused on culture; really dedicated to making sure that Surf Air was the type of place that people would enjoy working. We made sure that everyone knew how important they were to our overall mission. We were maniacal about making sure that when we launched the service would be something we’d be proud of.”

Surf Air Chief Marketing Officer Scott Porter—who is also one of Eyerly’s several co-founders—has piloted the startup’s recent outreach initiatives and noted that his team appreciates the community that helped it grow. 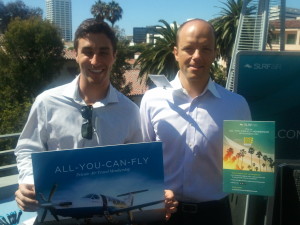 “Our company got its start at MuckerLab and is headquartered in the heart of Santa Monica, so we have deep roots in the Silicon Beach startup community,” said Porter.

Surf Air’s Facebook page is currently managed by Surf Air Marketing Coordinator Mark Noble. He explained that the snacks provided on Surf Air flights were chosen because of the initiatives they support.

Noble previously gained experience building partnerships thanks to his efforts leading a nonprofit called Recycle Computers Project that provides refurbished computers to homeless and economically disadvantaged people in Ventura County, California. He noted that Surf Air passengers are able to empower small businesses and organizations that give back to underserved people around the world every time they enjoy refreshments during flights.

Noble added that for every liter of water it sells, Waiakea—which was launched in June 2012 by recent USC graduates Ryan Emmons and Matt Meyer —donates 650 liters of clean water to people in developing countries through its partnership with global water NGO Pump Aid.

While Surf Air gives back to those who are struggling, it also is appreciative of the adversity it went through.

“Any business that has to wait 18 months from inception to operation faces its share of ups and downs; days when you wonder if it’ll ever happen, nights when you wake up worried about whether you can keep your team together without any tangible, verifiable progress,” said Eyerly.

“The experience of going through the tougher times has helped make us into the company we are today. I’m grateful we went through it, but glad we’re flying planes now.”

After experiencing turbulence, it seems like Surf Air is now ready to fly high.

Elias Kamal Jabbe is a Los Angeles-based journalist and PR Specialist and the Founder of Multicultural Matters, an online news publication which promotes cultural discovery, sustainability and entrepreneurship