Why Facebook OpenGraph Will Work and Why To Hate It 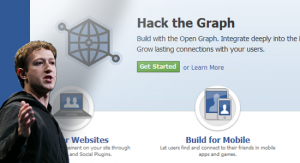 I was reading an article by Robert Scoble earlier today about how amazing Spotify and some other news app are on Facebook, and how awesome frictionless sharing is for the Internet. I openly can’t stand OpenGraph. It’s the one feature that stuck with me the most from the F8 conference this past September.

What is OpenGraph? It’s a way for you, the loyal Facebook user, to update your status and apps on Facebook, without you actually posting to Facebook. It’s brilliant, it’s powerful, it’s genius, and it’s absolutely the worst application of the Social Internet as a business since its inception.

Fact of the matter is, Facebook understands everyday people; while disregarding power-users, techno-junkies, geeks, nerds, and Apple fanboys. This single fact is the core reason OpenGraph will not only work, but get better.

Facebook understands that “everyday Joe” will want to use things like Spotify, and just click the “Allow” button that pops up saying “we own your online life, is that okay?”. They understand that this user type will freely grant Facebook access to share their online activity, whether it is reading the news, listening to a song, or visiting some random site that really has no business engaging with your “friends”.

How does Facebook know this? Think about it. Facebook has created a simple “Allow” button on a splash screen listing off permissions that you haven’t even read, you just close the window and discontinue your desire to commit. Non-power users, when they click on links and commit to installing an app, they are used to confirming application installation, so they can achieve the committed goal of gaining access to what interested them.

This is a core fundamental function of all web design that deals with “conversions”. Ads work this way, shopping carts work this way, and Facebook’s OpenGraph absolutely works this way. If Facebook truly cared about informing their users, and driving the point home, that “this application will passively share everything you do on it so don’t do embarrassing stuff, please!”, they would include that as a warning label — but that would just prove the point I’m making here. It would also hinder the blind acceptance of OpenGraph, which only works well if it’s accepted by a vast majority of their users.

People are openly accepting of the features OpenGraph offers, even Robert Scoble. They can find out more about their friends and connections than ever before! They can discover new music, new foods, new news, new and amazing embarrassing things they would have never seen! That’s right, your connections on Facebook will see that moment that you listened to the “I’m Too Sexy” mash-up remix performed by Justin Bieber and the late-80’s Menudo.

One of the most powerful ingredients in this amazing new feature is going to rely on the convoluted and completely counter-intuitive controls within Facebook. It’s far too easy to find Spotify, Hulu, Whatever News Site, and other “fun” applications that exist in the Facebook ecosystem. It is also far too difficult to navigate privacy settings, application settings, and any sub-feature in Facebook that doesn’t revolve around installing an app, allowing that app access to your online life, updating your status, commenting on a photo or wall, or sending a message.

The spaghetti-interface inside Facebook’s controls is a lot more complicated than the standard end-user will ever grasp, desire to grasp, or even manage to the point of protecting themselves online. This will, in fact, result in story after story (and possibly court case after court case) of people doing “OMG! HORRIBLE” stuff online while they were supposedly engaged in another responsibility, thus resulting people getting fired, expelled, suspended, or just outright sued. But, OpenGraph is an amazing feature of the Internet.

Facebook is a money machine, it pulls revenue from apps and ads. Third party sites use it’s demographic data to predict and project desired products, people that are not Facebook get to track, abuse and use information about Facebook users whenever they pay a fee to get access to their holy grail of all business commerce since the dawn of commerce – details about the customer. These things, in and of themselves, are awesome. I’d love a site to know that I like shooting with Canon gear, and present me with things when I visit that will fit that, sure – but I know how to find that stuff myself as is. In fact, Facebook is positioning itself to make decisions for its users, with or without their consent. Facebook has already decided their end users can’t put people in lists and organize their status-stream in a fashion that makes sense to them on their own record. Facebook even decides what is interesting to their users, free of charge.

Aside from Facebook’s legal battles revolving around tracking their users even after they log out of Facebook; aside from the fact that they’re openly telling people they will overshare about their lives online, and then justifying it as the price you pay for using their “free” service; aside from all that, at the end of the day – Facebook is going to take full advantage of what the majority of their users actually don’t know. Facebook is going to bank on the “average Joe’s” lack of understanding of cookies, sessions, market research data, general data mining, and what oversharing could lead to online, and they’re not going to care. If anything, Facebook is going to continue to make OpenGraph applications more appealing, even easier to access, and more invasive in the process, and the end user is going to openly Allow it.

Even worse, Facebook is going to continue to pioneer frictionless sharing and in doing so, they are going to open the door for countless other companies to practice the same scheme-think business model to take advantage of users for all they’re worth, while turning the bucks as fast as possible in the process. I’m with Mike Elgan on this one, and even more so, believe that passive sharing (meaning user-less engagement) is a fraudulent means to claim high user-engagement, even though it has little do with engaging the user.