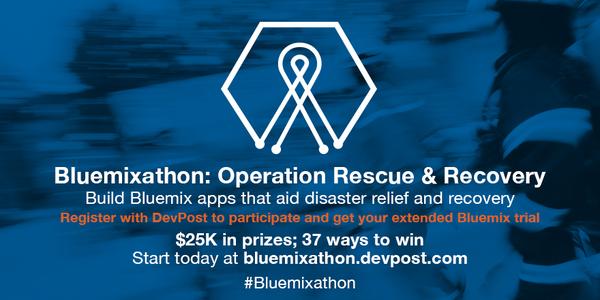 There has been an explosion of useful applications on the market to aid with everything from diagnosing application performance monitoring to checking your cholesterol levels. However, when a disaster strikes, every second counts — and the need for innovation and creativity to solve the problems created by catastrophes can not only help first responders, they can make a difference between life and death. Recently IBM combined forces with DevPost to put out the call for developer/heroes to solve some of the world’s most dramatic and important problems with its worldwide hacker contest for good called Bluemixathon: Operation Rescue and Recovery.

Developers can be modern day heroes. What I like about this hackathon is that it really gives developers an opportunity to make a real difference in the world. Creativity coupled with the type of technology advancements IBM has made available to developers such as the cognitive computations behind Watson, and the cloud platform sandbox provided by Bluemix — has supplied the necessary tools for true innovation. It is an opportunity to be a hero, save lives and win cash.

Developer by day, life-saver by night? Do you know some developers interested in solving these problems? Pass this on.

Never tried Bluemix before? No worries, the contests offers tons of resources for first-timers to get up and coding fast.

The submission deadline is November 11th, so register today and get started! Winners will be announced on December 10th.

For more information about rules and criteria, see Bluemixathon Challenge on Devpost.