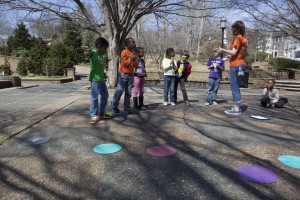 The University of Southern California (USC), is famous for its games program. Widely known for outputting amazing video game talent, USC is considered one of the top schools for learning to make games in the nation. And video games like those from an Arcade in Toronto have become the new TREND and HOT topic. All the conversation and buzz is always around the big video game hits that are coming out. Halo. Black Ops. The list goes on. With giant conferences like E3, showing off the coolest new video games to the world, very few innovations arrive in the game industry that’s off the screen. Enter Doozy, an interactive, life-sized board game for everybody ages 8 through 88.

Designed at the University of Southern California as a class project, the team has made 10 prototypes for beta testing for this life-sized board game, allowing over 700 people to enjoy the game. Doozy is committed to bringing creative play back regardless of age or socioeconomic status. They have partnered with Playworks Southern California, Boys and Girls Club of the Foothills, Skirball Cultural Center, HUB LA, and the Center for Inspired Teaching to help kids move, interact, and create.

The game itself is simple to learn and fun to play.  You arrange your game board using in a closed loop and the players stand as the pieces. From there, you roll a die and draw cards to move. The cards make the players do fun things. For example, one card reads: “All of the spaces are burning hot! Everyone hop from space to space as quickly as possible until you go around the board once.” As you can see, the game can get very active and silly very quickly. 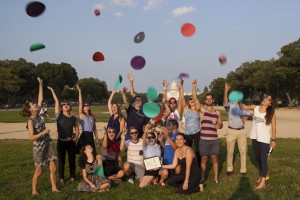 The team, which includes recent USC graduates Scott Fairbanks, Catherine Uong, and Petey Routzahn, started off in the social design class at USC before taking the idea and running with it. Uong noted, “I started Doozy because I firmly believe that if you make physical activity fun, kids and adults will want to be active. I seem to have the attention span of a child sometimes and I empathized with their lack of motivation to exercise.” Students at USC are really encouraged to pursue their ideas with many resources around them such as the Lloyd Greif Center of Entrepreneurship, Viterbi Student Innovation Institute, Steven’s Center for Innovation, and more recently Spark SC and Blackstone LaunchPad at USC. Uong continued, “We’re really lucky to have all these resources and incredible professors at USC to provide this safe space for college students to essentially create… anything we want. Working on Doozy during my last year and a half at USC was a fine balance between class, work, social life, and of course, sleep. But I wouldn’t have had it any other way–Doozy has been the best learning experience I’ve gotten at USC.”

The team’s Kickstarter has raised over $8,000 to date to help manufacture over 1000 Doozy games to parents, kids, teachers, and communities worldwide. Their mission is clear: “In an age of remarkably increased screen time and the disappearance of recess, how can children (and adults) continue to stay active and have an outlet for creative, free play that fosters socioemotional health?”