Hundreds of vendors fly to Las Vegas each year. Some skip out on one year and others are regulars. It is impossible to visit each and every booth in four days, but the biggest names cannot be missed. Everyone needs to know what they will roll out later in the year and what new technology will revolutionize the way we live. Here is a look back on some of the biggest booths at CES 2015. 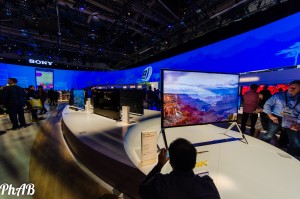 Walking into the booth, you immediately sense Sony’s push on 4K technology. “The World’s Thinnest 4K TV” lines up the front booth, boasting in visual colors and 4K cameras are displayed on the walls next to the TVs. Continue pass the hoard of 4K TVs, and Sony lined up their Xperia line of devices in the middle of the show floor. A presentation of cameras, speakers and the Playstation systems filled the rest of the booth. Sony’s overall showing did not impress… 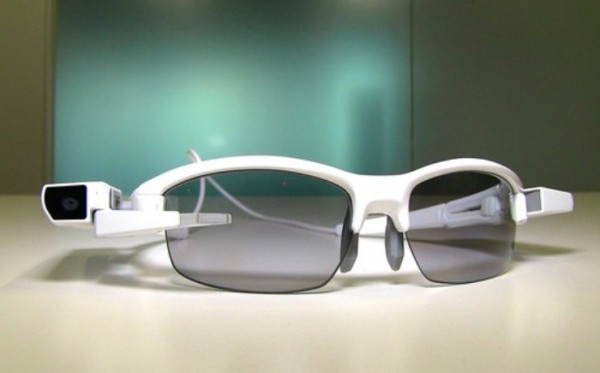 …until the leisure stroll to the back corner of the booth. Hidden from sight, Sony had a few working prototypes on their augmented reality (AR) glasses. AR glasses are nothing new in Sony’s workshop, as a set of prototypes were on display at CES last year. Originally looking like your grandmother’s spectacles with an on-screen display of 80s computer green text, the prototypes were looking far from finished. But the changes from the last show, gave a glimpse on how serious Sony was getting with their pair of glasses. The SmartEye looked more polished and ready to compete with Google Glass. The display on the glass provided a simple and clean display and the SmartEye has the sleek and polished Sony look and feel.

Sony’s other surprise showing was the revival of the Walkman. Sony Walkmans’ from the past, allowed music-lovers to enjoy music outdoors at a relative cheap price. This Walkman may have gotten a little over its own head, especially the price of the device came up at over $1,000. Yikes! The price alone will have others shaking their heads and asking why and others will flee from the price alone. Sony promises a musical experience for audiophiles, but is the difference going to make up for the $1,000 price tag? Knowing Sony recently closed their computer/laptop division, many wondered what Sony’s next step was going to be. Apparently, the revival of an expensive music player was better suited than bolstering the Xperia line or looking into a revival of the VAIO laptops.

Pros: The AR glasses looked promising compared to other Sony offerings and the sports wearables were a nice change of pace from…

Cons: …the loads of 4K TVs and the Walkman. 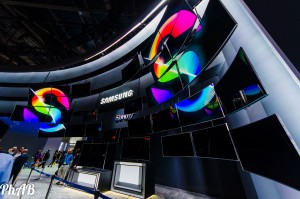 A grandiose display of UHD TVs light up the back of the booth. Head through the entrance and a smorgasbord of Samsung products are neatly presented. Samsung may have had the most variety out of all the other major booths. However, the number of products did not show off Samsung’s strength and ultimately have hindered the progress Samsung was trying to present.

The newest Samsung phone, the Galaxy Note Edge, gave attendees a look into what future phone models can look like and what it may offer. A curved screen may have peaked interest, but did not do much more.

The new Milk Music service lets participants experience what Samsung’s new service does and how it will it compete with Spotify and other streaming music services.

Giant (and I mean giant) 4K and UHD TVs showed up once more. Vibrant colors mesmerized passersby and the size of the TVs is not something to ignore. The introduction to 8K was surprising as 4K TVs were just introduced last year and the biggest problem has not been solved with 4K, the lack of content fully utilizing the 4K technology. The introduction to 8K did surprise, but again, the problem of lacking content is not going to help push 4K or higher TVs out the door.

The Chef Collection returned as well and showed off Samsung’s line of kitchen and house appliances and showing slowly everyday items will eventually be branded with Samsung. Not going to be surprised by an introduction of a home by Samsung.

Samsung had the chance to out-do its rivals, but did nothing much this year. Another showing of the same lineup of technology and a few new services.

Cons: The giant 4K TVs only the 1% can own. A lack of new tech was disappointing. 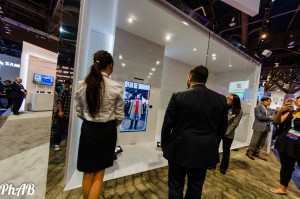 Toshiba probably had the most underrated booth of all the major brands. They utilized their booth spaced to the fullest showing off what was in their current workshop. The only booth to not show TVs as the main centerpiece and using an android to do just that. Yes, an android that could replace everyday people. Maybe that was overstated, but a welcoming, yet strange surprise. One of the biggest crowd-attention-getter at CES this year.

The android was pre-programmed to talk about its uses and what the future could hold for the very model itself. Unsettling to look at first, but interesting to know how Toshiba was going to bring a tech like this to attendees.

Toshiba’s other notable tech was their mirror. Not just any mirror, a mirror that projects images of the clothes on display and matches up with your reflection to give you a quick glance on how the set of clothes will look on you before getting into the store and into the dressing room. A very clever business solution for retail clothing and an introduction for other uses in other business sectors. Motion-sensors capture the user’s movements to dictate what shows up on the mirror and it does a great job matching clothes on top of the reflection.

Pros: Underrated booth. Had the most diverse array of technology shown (aside from Intel). New business solutions mirror and talking Android were do-not-miss highlights of CES 2015. 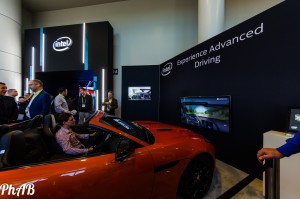 Intel had a wide-variety of products on the floor. Unlike other brands, Intel mainly supplies its products and did not have “actual” Intel products on the floor. One main display featured Intel’s vision of intelligent driving. Cars can display more information, in real-time, to give driver’s a better sense on what is on the road ahead of them and around them to create a safer and easier driving environment.

A dark corridor of the Intel’s booth showed off Intel’s Real Sense. Motion-sensing cameras were placed to imitate movements made and were displayed for passersby. Intel showed off this tech to bring awareness to an existing technology and to be more readily used in future projects.

A showing of 3D scanning cameras were fun, as it can scan a great amount of detail. The demo scanned a few angles of the participant’s head and then placed on various 3D model bodies. Another demo allowed the facial recognition software to imitate facial movements through a 3D model of certain faces.

The announcement of the new Broadwell processor at the CES 2015 press announcements showed off a few tiny computers called Next Unit of Computing (NUC). And the biggest item on the list was the Intel Compute Stick. However, the “PC on a stick” did not show up on CES floors and remains hidden.

A slew of various companies showed off different products using Intel’s technology and ranged from drones to the best gaming PCs. 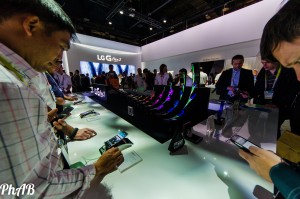 A similar booth to what Samsung did. A wide-variety of LG products lined the floors with emphasis on 4K TVs, wearables and curved LCD monitors.

What LG did right with the mobile phones. The Samsung Galaxy Note Edge had a curved screen on one end, but LG wrapped both ends of their phone. But the big surprise was the LG Flex 2. The light-weight device coupled with a gorgeous screen and made for killer combination for the phone.

The LG digital watch made an appearance and yet it did not. It was nice to look at and play with, but the idea of a wearable watch still needs some time to be worked on.

LGs home appliances did what Samsung’s home appliances did last year; a surprising showing. The refrigerator had six (six!) doors and expand on the door-within-a-door concept. Their washing machine had two-machines-in-one. The main component and a smaller loading bay at the bottom for quick and delicate loads. The best appliance of them all was the LG Styler. The original Styler was expensive and bigger, but the new version is supposedly cheaper and a bit smaller. The idea behind the Styler is to dry clean a dress, jackets and pants without the use of chemicals. It even claims to get some more of the grime out. The appliances can be connected to the LG app to create more specific settings for each appliance.

CES 2015 turned out to be CES 2014.5. The trends of last year (mainly 4K) heavily dominated a lot of booths and not one single tech became an innovative highlight of the show. There were plenty of bright spots at big name booths and smaller booths alike, but none showed a tech everyone was talking about. This year was a quiet year for technology and hopefully the reasoning is because someone is out there using the off year to create next year’s highlight.