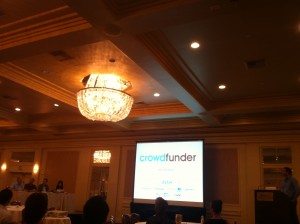 On Tuesday, July 10, Crowdfunder hosted Crowdstart LA, the first crowdsourced startup contest at the Fairmont Miramar Hotel in Santa Monica. The event was sold out, attracting founders, angels, VC’s and future entrepreneurs in the LA Startup Community. A total of 10 startups made up of 5 companies that received the most votes from the crowd and 5 companies chosen by the Angels and VC judges pitched in front of a live audience for a chance of winning $25,000 in funding. The panel of experts not only judged the competition but also gave the companies feedback after their pitch. Judges include Jason Nazar, CEO of DocStoc; David Lambert of Right Side Capital, Sam Teller, Managing Partner at LaunchPad LA, Dana Settle, Founding Partner of Greycroft, Jeff Solomon and many more!

After the pitches and the announcement of the winner, Chance Barnett, CEO and Co-founder of Crowdfunder lead a seminar on Business Crowdfunding, updating the attendees on crowdfunding laws. According to Barnett, although the JOBS Act was signed, the SEC are still drafting the rules and regulations that will actually make crowdfunding legal. This will most likely take event in January 2013. Barnett encouraged people to prepare themselves now and get involved, “If you’re a company, create your profile and start creating your network of future investors. If you’re an investor discover the companies and connect with the founders.”

Here’s a recap of a few cool companies that pitched:

TradeYa Inc. is a user-driven, community-based marketplace allowing people to trade their goods or skills for things they want or need. TradeYa Inc. transactions does not involve any money. It is simply a barter system for those that find value in each other’s skills or stuff.

Doctors Coupons is exactly what it sounds like. They provide a platform that helps users find heal discounts and deals provided by health professionals in their area. The site caters to people that pay out-of-pocket for their healthcare needs. According to Doctors Coupons, 52 million Americans have are uninsured and 50% have no dental care.

Allowance Tree was one of the favorites of many of the parents in the audience. It teaches kids financial responsibility by simulating real-life money management with their actual allowances. They also promote good grades and positive habits by giving children incentives for getting an A and doing chores around the house.

Addroid promises to be a disruptive company, significantly lowering the barriers of entry for video banners. They allow advertisers to combine the branding power of video with the reach and immediacy of the standard banner ad marketplace. BTW, if there was an award for most entertaining pitch, Addroid would win it hands down! Founder, Matt Cooper was a very crowd-pleasing, almost comedian-esqe speaker!

Divshot was the winner of the Crowstart LA $25,000 Competion. The founders came all the way from Kansas City, Missouri. Divshot is a tool for web application developers. It is the first interface prototyping tool that gives its users the ease of a drag-and-drop mockup application.