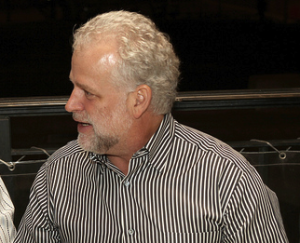 It was 2008. Silicon Beach as we know it didn’t exist, coworking was unheard of, and an angel was mainly thought of as a heavenly creature, not the likes of Paige Craig. Digital LA had just begun throwing monthly networking events, Rubicon Project was in its infancy, and the Roosevelt in Hollywood was the local hangout. However, that wasn’t the start …

Rewind to the 90s. Money was flowing with the first Internet boom. Entrepreneurs like Matt Coffin, Kamran Pourzanjani and Brock Pierce were making their mark. Jason Calacanis coined the SoCal scene the “Digital Coast,” and Brad Nye brought everyone together at his notorious VIC events (Venice Interactive Community).

Two worlds, two times, but one community. That’s what comes to mind when I think of the annual Digital Family Reunion event held at Wokcano in Santa Monica. Five years ago Nye from the so-called “1.0 generation” joined forces with Kurt Daradics from the new class of digital execs to launch DFR, and it continues to be the multigenerational event in LA tech.

Jim is the Chairman of Micro J Systems and a 25+ year veteran of Southern California’s executive recruiting industry. He has personally led over 600 successful executive searches throughout the rise, fall, and subsequent reemergence of Southern California’s technology scene. This is a man who has seen it all and has a deep understanding of what motivates us and how we work together … or don’t.

Jim not only knows how to build companies and teams, but communities as well. He founded industry roundtables LAwNMowR and Digital Coast in the 90s and more recently, intimate monthly dinners for C-level execs and investors called ThursdayNights.

He’s a man with a big laugh and an even bigger heart, known for being an active Big Brother and for leveraging his events to fundraise for various causes. He’s also a shining example of the various people we need to build and maintain a strong technology ecosystem here in Los Angeles. Professional services like recruiting, public relations, accounting and HR all play a vital role in our businesses and they deserve a place at the table.

Today LA tech is stronger than ever, touting numerous accelerator programs, angel investors, coworking spaces and educational opportunities. We’re seeing an influx of new interest from the likes of Chris Sacca, SV Angel, Karlin Ventures and even the “Winklevii” twins of Facebook fame.

Independent sources are also validating the market, like Startup Genome who recently named Los Angeles the third best high-tech center in the world, just behind San Francisco and Tel Aviv.

Let the good times roll, but let’s do it together. Watch my chat with Jim to learn unexpected ways you can attract the right talent and avoid the brain drain.