Earbits was featured on TechZulu awhile back.  But how are things holding up at Earbits since the last time?  From the look of things, Earbits is on the right track to be a force in the online music streaming industry.  With a new mobile app releasing today (on all Android devices) and the social currency system gaining new ground, Earbits just upped its game.

To become a bigger online music streaming service, the next obvious step would be to bring the same great experience Earbits has provided online by bringing it to mobile devices. Earbits is expanding its services to its audience by connecting them more frequently to the music and artists they love.  Sign-up and use “groovies” and gain “karma” to listen to all the wonderful indie music that has gathered in Earbits’ library.  Read bios, find specific songs, and join the artist’s social media pages to share among friends and followers.  All of the original functions are there; the only difference is that you can take the music with you instead of waiting to get home or to the office to listen to Earbits. 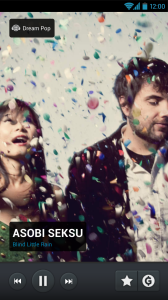 According to Earbits, the numbers from using their unique system called, “Groovies”, has brought more fans and artists closer together.  Here are some numbers, Facebook fans acquired rose 101%, song recommendations on Twitter rose 85.8%, and email signups increased by 261%.  All these numbers equated to a larger fan base for artists and a larger margin of revenue gained.  The social currency has brought artists more fans and revenue than any other online music streaming competitor.

With all the social currency success, more artists have been joining the Earbits music revolution.  According to Earbits, they have 550 labels, 9,300 artists, and over 350 free music channels to fill up your playlists.  The music community is continuously growing and there are no signs of it slowing down.

“Groovies” proves that social currency works.  The numbers given by Earbits shows artists are not only gaining fans, but gaining revenue through Earbits.  Earbits is launching a service for music lovers and for the music artists alike.  With all their successes, Earbits has still stuck to its roots and providing people with music and providing artists the fame they deserve.  At the rate Earbits is growing, the future looks brighter and louder than before.

Get the app here.  Or visit Earbits and see their complete music collection.