Music streaming services are either full of ads that interrupt the flow of music or have a premium service to hear the latest and greatest songs without interruption.  Even with all that cash flow, the listeners only hear bands from big labels and the smaller indie bands are pushed away and forgotten.  It’s hard for smaller labels to get any radio time and to have their name known in the music world, thus they have less resources to grow from.  Earbits wants to fix those problems for listeners and small-time bands by recreating the music streaming service.

Earbits was founded by Joey Flores, Yotam Rosenbaum, and Ben Bryant in 2010 and both have created a new social way to listen to music.  According to Joey Florez, Earbits is focused on two goals: the listeners overall experience and to help smaller indie bands be more exposed to the music industry.  Since smaller indie bands can only get so much exposure in the music industry and to spread their music, most of the time they have to use words and images to describe their music.  Words and images alone cannot describe music and to help these indie bands, Earbits was developed to make a service that brings fans to the indie bands much easier.  Earbits is a win-win platform where both listeners get their music service for free and the music industry is able to bring in more fans. 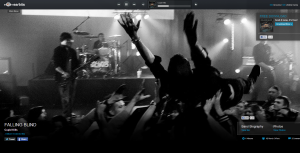 Earbits is similar in a sense to Spotify and Pandora, where listeners can join a certain channel, listen to some music, create a playlist, and skip certain songs.  But that’s where the similarities end.  Earbits does much more to help not only listeners get a chance to find great music, but also gives bands a chance to connect and grow with their fans more.  One way Earbits is trying to connect fans and bands together are through a “social currency” called Groovies.  Groovies are free points dedicated to help listen to certain songs on a band’s album.  Normally, each song is available to listen to for free, but listening to a certain song, say on a band’s album costs 10 Groovies.  More Groovies can be earned by joining the band’s mailing list, liking or tweeting a song you are listening to, liking the bands Facebook page, purchasing their music, and more.  Groovies help get rid of those pesky ads that are ruining your music experience and allow bands to get more value from listeners.

Bands on the other hand not only get people to follow them on Facebook and Twitter, but also they are able to grow their fan base in new ways.  To have songs played on Earbits, bands must have their music be “radio ready” and needs to pass a quality check with the team at Earbits.  Then the team decides if the music is ready to stream and deliver music to awaiting listeners.  Bands are able to purchase packages to help grow more traffic to the band’s page and songs.  Bands can also pay for packages to allow their songs be played multiple of times in a month and bring more awareness to their music and name.

Earbits is just over three years old, yet despite being a fledgling music service, it has become a huge site for music lovers.  The team is working on getting more awareness for bands and a new app for both iOS and Andriod.  Earbits has been visited in over 240 countries and has currently over 300 different music channels.  The number of music labels joined is at 480 and growing and the number of artists availabe is at 8,000 and counting.  Music streaming has never been so music friendly as Earbits has.  The social currency, zero ads or commercials, no fees, and the basis for discovering new music puts Earbits in a position to snatch the crown from other music streaming services.  Feed and discover music for your ears at Earbits.