Jumping into the App Game | Making Apps The Market Wants!

Apps are quickly becoming a ubiquitous part of life. From the phone in your pocket to the television hanging on your wall, apps have penetrated technology and they aren’t going anywhere. Smart technology doesn’t work without clever software to make it useful.

But where do you start? Do you need to wait until you have an idea that’s never been done before? Or do you toss your hat into the ring with an already existing concept, making a clone in hopes to snatch away market share? Do you need to take the time to learn coding or should you search out a firm to help bring your idea into reality?

When you get down to the nitty of the gritty, creating an app is the same as starting any other business. You have to know your markets, you need to make sure you have qualified people creating the product, and you need to find something that’s going to make you stand-out in comparison to all the other noise out there.

Over the next few weeks, I’m going to be covering the steps to getting started with diving into the app business. Lets get started. 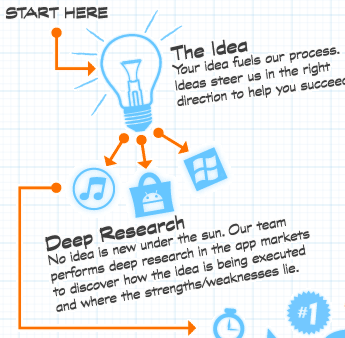 Why Are You Making An App?

Start with the biggest question first – what is your motivation behind creating an app? Why you’re looking to join the app race dictates how you should approach the market. Your reasoning will inform what platforms you should choose, what target audience, what feature-set is necessary, and what your eventual marketing & personality should be.

If you have a great idea burning inside you…then your first step is to realize your idea has been done before. After over four years of app development, there are no new ideas under the sun. Don’t let this discourage you, however, because the idea is just the acorn that grows the oak. What matters most is your execution of that idea.

If you are simply interested in making money in the app space…then your first step is to start researching what kind of application you are interested in making. You can choose to see what’s currently hot on the market or you can look at your daily life and pin-point pains you have. Usually if you have a problem that an app can solve, then someone else will have the same problem. If it’s in a niche market, that’s even better. Niche apps can usually demand a higher price point because there isn’t much competition out there.

Truthfully, getting involved in the app market is more about creating a solution that solves problems which people want fixed, in a way that people aren’t presently solving them. Your approach is what will get your app the attention you want.

Your next step is to start deep market research and see what other apps are targeting your specific market. Google, iTunes, the Android Market, Crosswa.lk, Chomp, Appolicious, and other sites are great starting points. Having competition isn’t a bad thing. As any investor will tell you, competition in a space means that there is a need for a solution.

Research is more than discovering what applications exist, but taking the time to install, use and track how those apps are tackling the problem. A few things to note for each app are the following:

I suggest tracking this data in a spreadsheet of some kind. This will allow you to start checking for what elements are similar amongst the competition, and what elements are specific to a certain application. If each app you encounter has certain features, you may need to match up to compete appropriately. Your app may have a hard time gaining foothold if it can only accomplish half the tasks the competition is capable of.

However, it needs to be noted that an app is best when it does one thing great. If the competition is bloated, too feature heavy, causing users to become frustrated with its confusing interface, then a simple answer may be the best one.

Apps are bite-size morsels of programming, to help us get through our daily lives and accomplish tasks. The very nature of an app is to be compartmentalized rather than an all-in-one solution.

Deciding on a Direction

Now that you’ve done your research, looked at the potential competition, and sized everything up, you can make an educated decision on which direction you want to go. There’s no magic bullet answer here. Like any business, success in the app market won’t be about any one factor, and future steps in branding, interface, feature-set, and marketing will play just as big of a role. That being said, there are some items to consider in this ideation phase:

If there are dozens of competitors and clear market leaders…you may want to avoid joining the fray unless you’re ready to roll out an extremely large marketing campaign to grab an audience’s attention. Many entrenched companies built their apps with sweat-equity, love, and a hardy dose of being early to market. This gives them app loyalty.

If your budget is limited…don’t try to tackle the giant. David can slay Goliath, but the odds are stacked against you. You are probably not the only one vying to take Goliath down, so you’ll have to get in line and compete with the chatter. If you’re going to take down Groupon, you’ll need deep pockets and a lot of time.

If you have a great catch…then you may want to forego the two options above. I have counseled countless potential “appreneurs,” and a great catch or take on an existing concept can, in fact, take down Godzilla. A really clever, interesting spin on an app people are used to can be the exact right thing to get people interested. It also offers a strong ledge for marketing to latch onto, which is extremely important in getting your app onto someone’s radar.

Your next step is creating an in-depth list of features for your app and how you want to approach the market specifically. In my next article, I will cover how to choose your features, your approach to the market and the potential pitfalls that can pop-up.

Q Manning is the CEO of Rocksauce Studios, an Austin, Texas based Mobile Creation Studio, and has been involved in the creation of over 60 apps. Q is a 16-year veteran of the tech & design industries, winner of numerous design awards, director of a feature film, and lover of karaoke. If you're in town, look him up and have a chat over a cup of coffee.