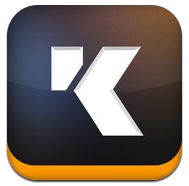 Founded by Alessandro Petrucciani from Italy, Alex Napetschnig from Austria,Baris Tamer from Turkey, Emiliano Saurin from Argentina and Roland Heuger from Germany, Klash App recently closed its first ever investment round and revamped its iOS App which is now online.

Klash closed the undisclosed sum of money from Venista Ventures and Eierfabrik  both based in Cologne.

Klash offers a web and mobile platform  that lets people challenge and dare their friends for fun, honor and actual rewards, said the investment round will help it make an awesome product for the public and also help distribute it to the masses this year.

The  team says the revamped version of the Klash iPhone app has a better interface and animated GIFs for cooler proofs and a better overall Klash experience. It is now easier than ever to create fun and daring content.

Klash for iOS was released last fall and had good reviews with a 4.9 out of 5 star rating on the Apple AppStore and the team believes this is just the start as they have amazing plans for the apps users. 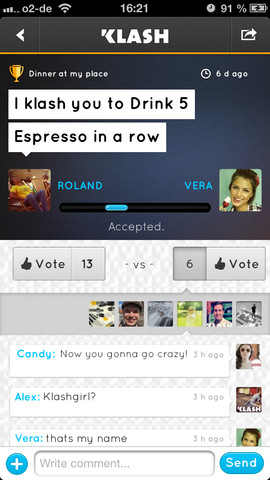 Alessandro Petrucciani, one of the co-founders says, “We strongly believe that we are not born for boring and that the world deserves to have more fun. Our application is a perfect tool to solve this problem.”

Venista Ventures COO Kai Schmude said they found in Klash a passionate and driven team with a great idea and were happy to support them to the top.

Schmude added: “Klash is a new project full of potential that merits engagement because they are putting a lot of focus on interacting with their users specifically through mobile channels.”

The team says it will keep on improving Klash and ensure their users the best user experience.

Alex Napetschnig added that their unusual but very effective guerilla advertising stunts, ranging from little “homemade“ car-table-slide-action-videos to weekly Klash dare campaigns contributed to a very strong brand for the  “not born for boring“ identity.

Its inspiration was daring too.

The Klash Team says it all started with two guys challenging the third one to jump into the ocean and surf a wave for a reward of one beer. The guy who had never surfed before took up the challenge and hours later he was cooling down his countless bruises with the beer he just earned himself. Two months later Klash App was born and the guys have been building the product ever since.