MapMyFitness | Keeping an Eye on Health

Fitness and health has never been as predominant in the tech space as it does today.  Professional athletes in the past (and present) always had the money and resources to measure and gather every bit of information to keep them at pristine shape, but all an average person had was a weight scale and a mirror to help determine if they were heading in the right or wrong direction.  Technology today has helped change landscape of health and fitness for the average person.  Apps and wearable technology provide the average person the ability to keep track of the daily caloric intake, the distance ran, and even determine how much sleep a person had last night.  And that’s just scratching the surface of what’s possible for everyone.  MapMyFitness was one of the early fitness apps to devise a way to help the everyday person to keep track of their run easier and efficiently before the health and fitness was fully integrated into the technological world. 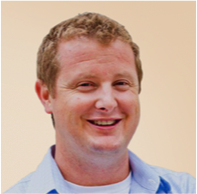 MapMyFitness became one of the first companies to successfully mesh the health and fitness culture with technology before the first iPhone came out.  Kevin Callahan, Co-founder of MapMyFitness, spoke to us about the creation of MapMyFitness:

“It was an evolution of sorts.  If we rewind to 8 years ago, it was me in San Diego training for my second marathon and I was trying to start another company at the time.  I was bootstrapping, so I didn’t want to spend the $400 on a GPS watch.  So, what I ended up doing was I ended up creating a little website where I can go click, click, click and map my run.  It was a tool that really empowered any type of runner to have access to mapping and tracking and being able to sort of ‘now you aren’t constrained into buying a $400 GPS watch’.”

Simply, MapMyFitness allows users to accurately track and map out running, cycling, walking, and other outdoor activities.  MapMyFitness also tracks any indoor exercises such as weight lifting, using the Nordictrack Elliptical, and dancing.  The app also gives out information and helps keep track of the progression the user made.  Metrics are important for any fitness buff and MapMyFitness does the job well by providing necessary data such as calories burned, distance traveled, time spent on workout, etc., etc.  Save favorite routes and share routes with friends and other users looking for a change in scenery.  MapMyFitness provides pre-determined routes and helps individuals or groups to decide what routes to run instead of blindly searching for a route.  A sleek and simple interface makes it much even easier for users to find the specific tools and information needed.  Nothing is complicated or distracting for the user and lets users focus more on the physical activity itself.

Another feature included in the app is the ability to log in and track the foods users eat.  A caloric counter helps keep track of how many calories burned or the calories gained to help waist sizes stay as small as possible.  MapMyFitness helps out the health and fitness community with a number of features available and the best part about the app is the main features are free, or pay $2.99 for a no ad experience – only a small price to pay compared to say a GPS watch.  The app is available on both iOS and Android with limited support on Blackberry devices as well.  Another service is available called “MVP” and gives users more advanced maps options and additional features such as heart rate analysis, route genius, mobile coaching, and in-app camera to name a few.  The iOS version does get a few more features for MVP users compared to Android users.  The MVP option goes at a rate of $5.99/month or $29.99/year.

MapMyFitness integrates social media into its app.  Kevin spoke about social media playing a part in helping people keeping up with their health and fitness lifestyle,

“We find users who want our challenges because all of a sudden they can convert their miles into points and get cash and prizes.  Maybe for you, you don’t want to look silly in front of your friends and having that social accountability and the Facebook wall sort of serving as your own ‘stick and carrot’.  The idea of social media being a tool in helping people reach a goal and talk about the successes in staying fit and eating healthy brings in others to join the healthy lifestyle revolution.  To make fitness fun, to make fitness social, make it simple, to make it effective and more importantly, at the end of the day we’re there to make it rewarding for our end user.” 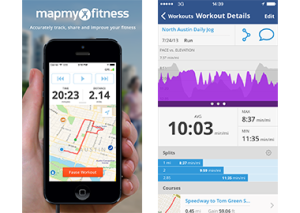 The fitness app also allows integration with other fitness wearables and fitness devices.  What makes MapMyFitness unique compared to other services are the services they provide their users.  “We have always described ourselves as an active lifestyle platform and it really is the kind of company we’ve become, even as we became a part of Under Armour.  One of the core things is we are a platform, not only are we powering and providing the best experiences for own users and our other brands like MapMyRun and MapMyRide.  But we’re also providing that same technology to other types of consumers,” says Kevin Callahan.  The ability let users connect other platforms with MapMyFitness and its other brands helps create a large community.

The biggest drawback about MapMyFitness isn’t the app itself – surprisingly – but the device the app is running on.  Smartphones have a notoriously short battery life (as we all already know) and coupling that with the GPS enabled means death for the phone in a matter of hours.  Don’t forget to fully charge the phone or the app will be as useful as holding a brick in the middle of a run.  Another problem is the size of the phone.  Phones like the Samsung Note series or the HTC One are going to have a size and weight problem.  The bulkiness may affect outdoor activities and be an uncomfortable experience at first – or even the thought of the phone falling out can make others think otherwise.  Other phones such as the iPhone are going to be easier to deal with thanks to the smaller size, but unlike a smartphone, a smartwatch or another 3rd party developed tech are most likely going to be lighter and more convenient than a phone.  Even with shortcomings of the device itself, the app provides a very affordable solution for the general consumer base. 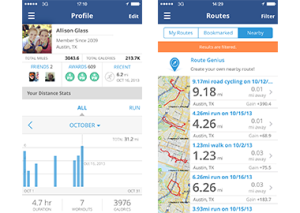 Health and fitness and tech never had a connection as it does today.  The marriage of the two give the average person to have a healthier and more active lifestyle and also have the resources to track their daily health progressions.  Doctor’s everywhere may be more relieved (or terrified) at the fact more of their patients are going to be healthier than ever thanks to the ever-growing advancements in technology.  I think there’s an old saying, “A healthy app a day, keeps the doctor away.”