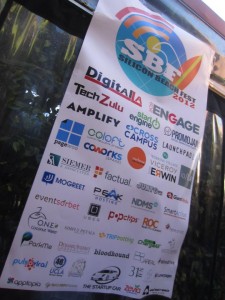 TechCrunch, Forbes, PandoDaily, and other national and local media covered the fest, centered in Santa Monica and Venice at venues with views of the beach on picture-perfect sunny days.

“LA’s best chapter is about to be written,” said Eric Garcetti, LA City Council Member and Mayoral Candidate. He kicked off the fest with his opening keynote, saying LA is a unique city of mash-ups, where tech, startups and entertainment – plus creativity, cultures, and passion – mix with successful results. “Let us come together and celebrate…” 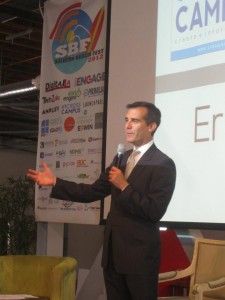 “It’s great to get the tech and Hollywood communities together to celebrate digital innovation,” said Kevin Winston, creator of the Silicon Beach Fest, and Digital LA CEO/Founder. “You could feel the energy and excitement from getting everyone together, from the opening party to the inspiring panels; the creative pitches at the hackathon, demo day, angel pitch fest, and student pitch fest; and the good-times bonding from the nightly parties to the beach volleyball court. Tons of info and tons of fun!” 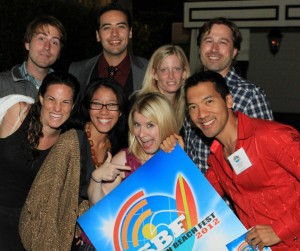 Attendees love the SBF energy. “Thank you for putting together such a fantastic festival with such smart minds and genuinely collaborative people from so many parts of Digital LA and beyond,” said Callie Miller, a panelist on the PR for Startups panel. “I had an incredible time, met so many great people, and I’m inspired by several of my SBF conversations to launch three new projects in LA. This would not have happened without SBF.”

RT @acheeseman Wow, #SBF what an amazing couple of days! Thanks to all of my old & new friends for making it so rich with optimism, expertise, & wisdom.

RT @OEInnovation #SBF why I live in #LA: intersection of #beach #tech #entrepreneur #entertainment. & #celebrity to pull off anything!

RT @urlgrl @DigitalLA had an amazing time at #SBF. can’t wait for next year!!

National and local press coverage so far is listed below. If u see an article or write a blog post, email us or leave a comment below with a link to your story and we’ll add it in.

Hollywood Today: The Digital World of Silicon Tech Collides with the Flashy Stardom of Hollywood

Photos of the fest featured many tech fest only-in-LA palm trees and ocean views. As always, Digital LA took a ton of pics. Ready set tag in the Digital LA – Facebook SBF photo album! We’re also collecting pics from the hubs and press and will release more pics as we get them.

There’s so much content to cover, we’ll highlight various SBF events over the next several days. To start: 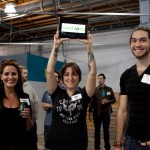 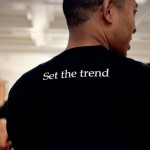 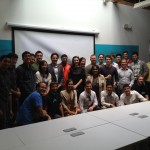 Congrats to That’s Suspicious Behavior (USC), the female-led team which won the grand prize in the student pitch fest with ten teams competing from USC, UCLA and Yale via 5-min presentations at CoWorks. That’s Suspicious Behavior is an app that lets you report shady activity like “Aggressive Begging,” “Creepy Person” or “Fight” in real time and share with others around you. TSB wins the grand prize, a “Coworking All Around LA” Prize Pack including one-month memberships at CoWorks, Cross Campus, Working Village, io/LA, and ROC, valued at more than $2,600. Thanks to students and organizer UCLA comp sci Ph.D Alex Vasilescu, w judges Mark Jeffrey, Jacques Habra (Noospheric), George (ShoeDazzle), and Alex (AtThePool). ShipMate (UCLA) took second place and Where My Dogs At (USC) placed third.

Social good startups shared how they got started and do-good digitally at Hotel Erwin. Brent Freeman (Rootz Founder, CEO), moderated the panel, including Chris Brereton (Picture Healing), Stacy McCoy (Give to Get Jobs), Bridget Hilton (Jack’s Soaps) and Liz H Kelly (Goody Awards Founder/CEO.) Panelists advised attendees to “Just Do It”: Go out and start your company, focusing on the MVP (Minimum Viable Product) to launch. Most of the speakers launched their startups with $2-7K. Many also use low-cost social media to promote. 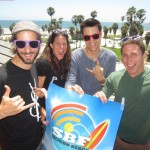 SBF attendees took a break from panels to bond at the beach playing games, cuz well, it’s the Silicon Beach Fest after all! Games started on Saturday morning with basketabll at the beach courts in Venice. Then attendees learned how to surf at noon with surfing lessons coordinated by Triptrotting. In the late afternoon, about a dozen SBFers played volleyball at the Vilebrequin Beach Games, followed by appetizers and drinks at the Fairmont Miramar FIG restaurant (where Digital LA recently had a Restaurants Go Social panel.). Several SBFers won pairs of $250 shorts!

Going thru SBF withdrawals? We are too! Due to overwhelming support of everyone asking “When’s the next SBF!” at the closing party, we are excited to announce we will do SBF again next June on the first wknd of summer again! We will also do a one-day version this fall in Hollywood and Downtown. Email info@digitalla.net with SBF as the subject for sponsor or speaker info.