USC Students Show Off Their Innovations at 2013 Innovator Showcase

The University of Southern California has developed a reputation for innovation and entrepreneurship over the years. On Friday October 25th, this innovative spirit was put on display at the 2013 Student Innovator Showcase. In this yearly event put on by the Stevens Center for Innovation, 30 teams, selected from a pool of 70 applicants, presented their unique ideas to crowds of students, parents, and judges. Because the event was scheduled during Trojan Family Weekend, a weekend where parents and family from all over the nation come visit the USC campus, the event was filled with curious family members. 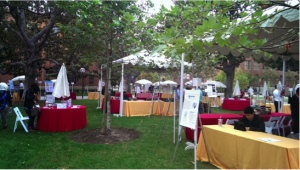 The event began at 9AM as the early visitors began exploring the showcase. While the teams were all given a table and poster stand, each team used the booths differently. Some teams handed out brochures, and other teams did demonstrations of their ideas. The students, which consisted of both undergraduate and graduate students, spent until 4PM pitching their ideas and answering questions from the many groups that came to the showcase. “We want to get more exposure to different kinds of apps and ideas. We want to give others exposure to our idea as well. A true innovator seeks out opportunities whenever they come,” stated Murali Joshi of Venu, a mobile app that provides retail locations for multiple parties to meet.

This event was a competition, and judges began making their rounds around noon. The judges, which featured experienced entrepreneurs, investors, and professors, made their way around the groups and listened to the different pitches. After hearing the pitches, the judges gave feedback and comments to the student innovators to help them improve their product and business plans. The judges then chose the top 10 to participate in the Fast Pitch, where presenters had 3 minutes to pitch their idea to an audience and compete for the money prizes. “It’s not about the money for us,” said Cosmo Scharf of Coursewiz, a college course-scheduling platform. “We want to get some feedback and get a chance to talk to the judges.”

Although only 10 teams qualified for the finals, many of the students who did not qualify felt like they learned a lot. Karishma Hirani from DelecTable, an application ready to change the dining experience, said, “It was great practice for answering questions. Communication was most important. Getting our point across fast and effectively. We’ve totally thought of it and researched it. We just have to translate it into what we say.” “I really learned to develop my pitch on the spot and respond to question,” said Kevin Chen from Flippr, a business networking application. “I encourage anybody with an idea to come pitch because it is a great learning experience.”

Between the end of the Showcase and the start of the Fast Pitches, people got a chance to meet Mark Stevens, a USC alumnus, Venture Capitalist at Sequoia Capital, and founder of the Stevens Center for Innovation. This transitioned into the final portion of the event: the Fast Pitch.

The Fast Pitch featured the top 10 teams (Coursewiz, SurfScooter, Wiz!, JellyVibes, Teledipity, Angel Coporation, Trail, StemJet, BriskRabbit, and InDepth), which involved novel ideas that ranged from wireless headphone thermometers to online music collaboration. Each team had 3 minutes to pitch their idea to the panel of judges. After each of the teams pitched their unique and innovative ideas, there was a raffle to win Google Retro Headphones and a Sony gift card. Student Ambassadors from both companies had been present during the Showcase and gave out raffle tickets for these prizes. Immediately following the raffles, Mark Stevens gave his keynote speech.

The winners were then announced and handed large cardboard checks. There were five categories of winners: 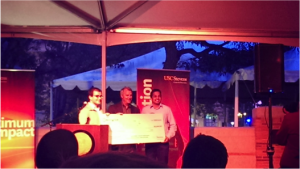 The winner of the Most Innovative Award went to StemJet, a bone marrow stem cell harvester that is easier and less painful than current methods. Furkan Sahin, a team member of StemJet, said, “We got good feedback from the judges. It was nice to see enthusiasm, and see that we are on the right track.” His business partner, Karthik Murali, added, “It was a great opportunity to present to a wide variety of industry leaders. We now have a solid proof of concept.” The two of them are part of the Health, Technology, and Engineering program at USC, which augments the training of select doctors and engineers.

Overall, the event provided students with a platform to display their interesting ideas to the community. The students got a lot of great resources and will continue to build out their ideas towards the future. Lars Perkins, a serial entrepreneur who was the CEO of Picasa, was one of the judges of the event and said, “I was very impressed by the quality of some of these projects. The bar is moving higher every year.”