Lost your bike?  Where are my kids?  Has the delivery truck found the best route to its destination?  My motorcycle was stolen?  These are some questions that have gone through the minds of business owners and the general public alike.  According to Valarm co-founder, Lorenzo Gonzalez, his motorcycle was stolen from an airport parking lot.  Because of his unfortunate event, Lorenzo and his brother, Edward Pultar, teamed up and decided to build an app to prevent thefts and other applications for research and data.

Together, the brothers made an app that works both on Android phones and tablets called, Valarm.  They created an app that has the multiple uses for multi-purpose users.  Utilizing the tools available on Android phones and tablets such as the GPS, light sensors, and accelerometers; Valarm is able to provide different applications that can serve both businesses and general consumers. 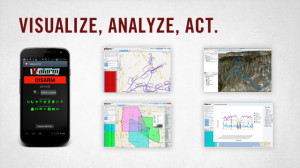 Commercial businesses are able to track down their vehicles by using GPS and have real-time tracking, allowing business owners to see how the vehicle is performing and what routes have been taken.  This information can also be produced publicly for certain businesses like food truck vendors, to let their customers know where they are and what their final destination may be.  Businesses may also track packages and containers to find any tampering or rough handling with any of the packages being delivered.

General consumers are able to use Valarm for tracking stolen items.  Parents can monitor car’s parameters by using Valarm and allows them to see how the car is being driven and where it has been driven to.  If items owned are either tampered and/or have been illegally used, Valarm is able sense this by light and motion sensors and send alerts to your phone.  Some other future programs coming to Valarm for consumers are baby/pet monitors and more advanced home monitoring to create more powerful monitoring tools. 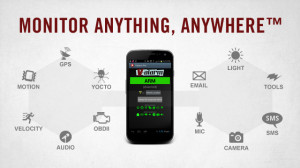 Valarm stores data within their servers sent from either your phone or tablet through networks like 3G, 4G and Wi-Fi.  If no network is available, the app is able to store all the data until reaching an open network.  The app is also handy for researching environmental data as it can hook up external sensors to the phone/tablet and record data gathered by the app.  Using one of Valarm’s Yoctopuce sensors, users can monitor weather such as humidity, barometric pressure, and temperature.  More sensors are in the works to produce more advance readings for environmental research and thus bring a more cost-effective tool to researchers.

The Valarm app has a huge number of applications for business, casual, and research consumers.  There are two editions available, Valarm Classic and Valarm Pro, costing $4.98 and $5.98 respectively.  The various programs available is staggering and Valarm is growing with new ideas and applications.  Valarm was created by a team who dealt with inconvenience and crime.  The team has a purpose to help people prevent those same inconveniences and crimes and not deal with the consequences.  Don’t be caught unprepared, visit Valarm and see what it can monitor and do for you.  Purchase Valarm Classic and Valarm Pro at the Google Play Store.