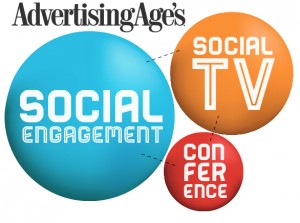 The West Coast biannual AdAge Social TV conference took place in Beverly Hills earlier this week. Elite media giants, agencies and brands flew in from around the country to discuss the rapidly changing and complex ecosystem evolving between the primitive television and social engagement union.

Social media giants Twitter and Facebook were both on hand to present their latest findings of their contributions to social television. Twitter’s head of TV, Fred Graver reported that “95% of the public social conversation around TV

happens on Twitter. It’s not a spoiler, it’s a companion.” The non-spoiler potential of Twitter is debatable, however there is no doubt that Twitter and television go hand and hand.

Anyone near Twitter during the recent presidential debates experienced the thrill of live mob tweeting around the same topic. And it is a rush at 110k tweets per minute. Media outlets like CNN and the Washington Post offer traditional coverage mixed with a live Twitter stream. Hashtags help to narrow focus of course, and yes, there are apps for that. Most apps that cater to television including GetGlue, Miso, IntoNow, and Viggle for example all have Twitter and Facebook functionality built-in. Companies like Direct TV, X-Box and Orange have incorporated Twitter into new viewing dashboards. The numbers really tell the stories of the power of the television twitter combo; there were 155 million Tweets generated during the 2012 Olympics generating 11 billion impressions. The television industry gets it, they need Twitter.

Facebook’s head of media and entertainment, Kay Madati, knows a thing or two about television. Advertising on Facebook before the launch of show, in the middle and during hiatus keeps engagement high, discovery and fandom higher. The power of Facebook also has the 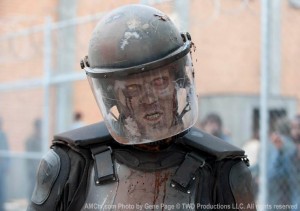 ability to make sleepers into sticky hits. “The Walking Dead” and “New Girl” were some examples mentioned during the conference.

Madati gave the audience a sneak peak at a new show called “Ready for Love” that has been seeded and conceptualized completely on Facebook before shooting has begun. The reality-focused show features prominent celebrities and a new take on a current dating theme. All casting for the show was done through Facebook, creating pre-show buzz and invested followers. After casting was announced, the winners and the celebrities kept fans up to date with daily insights of the behind the scenes action via their Facebook pages preceding show’s production debut. Madati estimates the show will reach a 1 million fan following before the show ever goes live.

Bluefin Labs gave an impressive demo of social TV analytics with real-time ad optimization and social media lift. As a commercial is aired, social comments and impressions are captured tied to that airing along with sentiment utilizing Twitter and Facebook API’s. Bluefin links TV shows to ads at scale with social, essentially. Other companies that demoed at the conference included SocialShows by NoBox, and iBubblr — a new startup whose originality is suspect.

Other highlights include “LOST” executive producer Carlton Cruze on hand to present his partnership with companion app i.TV, a presentation of the 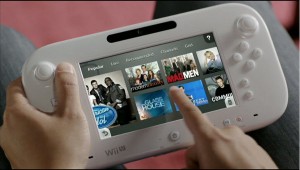 Evan Silverman, the Senior VP of Digital Media at A&E Networks gave a very thoughtful presentation on the disconnected TV analytics. His main takeaways were that there are various analytic services for social TV but there is no standardization between them. They all gather different metrics. Univision’s VP and General Manager of Social, David Beck showed the huge boost in Hispanic engagement through social media. Former “House” executive producer and current “Banshee” producer Greg Yaitanes walked the audience through his experience of being technologically ready to move to the second screen when few people around him were, and what he is doing today to counteract the imbalance of what he sees as crucial television evolution (creating transmedia experiences) for a show that will not air for several years.

There were more presentations that focused on the storytelling aspects of social TV and how they can be expanded into new directions either by users, social listening or by these new leaps in technology that are being created fast and furiously. The plot thickens and the social TV possibilities continue. As they say, stay tuned!