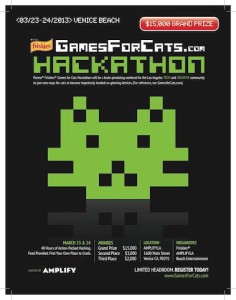 OMG. It is times like these that I wish I was a developer. This weekend March 23-24, Friskies Cat Food is hosting a “Games for Cats Hackathon” with a $15,000 dollar cash prize going to the developer who comes up with the winning app or cat game. Yes, using colors, swipes, animation and a scratch-resistant iPad, there is no telling how many hours of fun can be created for cats. The site is full of examples. No, I am not joking. This is as easy as giving catnip to your favorite feline — and cats do love Friskies!

What they want you to know: Get ready for an exciting upcoming event located on the Amplify campus in Venice. Friskies® Games for Cats Hackathon will be a brain-pixelating weekend for the LA TECH and CREATIVE community to create an app or game for cats with the fun spirit of the Friskies® brand as inspiration. Sign up now by clicking here.

This is not the first awesome campaign by Friskies. Last year they had an Internet Cat Video Film Festival with an award ceremony. Hat tip to Friskies for a generous cash prize and a very fun and stimulating tech challenge!