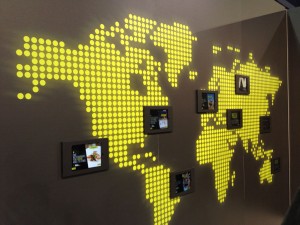 Kyle here LIVE from the Consumer Electronic Show (#CES) in Las Vegas ladies and gentleman. This year’s 2012 International CES is my very first, and will not be my last. What an amazing show. The press room has been loaded all day with people sharing details about this year’s some 20,000 new products being launched and over 37 football fields worth of exhibit space featuring some of the top companies.

Today started out in the South Hall seeing products in industries ranging from digital health care to audio to even robotics. Touring through the upper level of the hall we were able to grasp some of the newest and premier battery influenced technologies coming from companies like Duracell. As we got deeper we began discovering the latest and greatest applications being built upon motion sensor device similar to Microsoft’s Kinect.

Motion sensor based application seemed to be a growing highlight throughout the show this year. With applications being built to help golf pro’s perfect a customers swing to teach driving skills to new drivers. All super cool and just fueling the drive forward on the interactivity movement in technology. 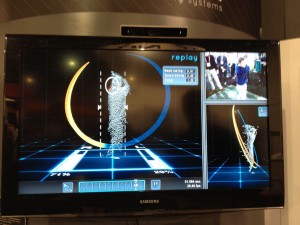 Along side motion sensor applications, touch technology was well represented. With new products and touch displays from 3M. A the 3M booth the interaction was exciting because you could see in the product the true potential of having an interactive table rather than needing to grab a computer. A sign of things to come in the near future as this technology continues to grow.

Heading down a level the sounds of DJ booths filled your ears and we had entered the audio zone. Now there were some audio companies on the upper level, but the ones below had a little something different to offer. That key difference aside from some rocking and beat dropping DJs… celebrities. Particularly 50 Cent and Ms. Snooki from Jersey Shore. Duracell also had some celebrity representation with Larry Johnson formerly of the New York Knicks (1996-2001). 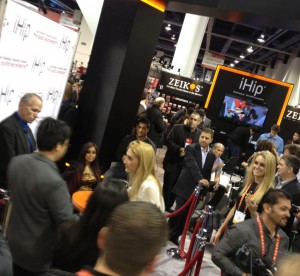 50 Cent was onside and meeting attendees to promote his newest line of headphones “Street By 50” by SMS Audio. They had some great design appeal to them and are using a military grade wireless technology as well. Snooki on the other hand was with company, iHip launching her new line of headphones as well.

After all the fun excitement in the audio section we decided to head over and check out the robot section. Now we all know at some point iRobot may happen. Well ladies and gentlemen…I’m here to tell its close. More on that later.

Overall an exciting day one with the team. CES has me hooked. Granted I’ll give a little credit to Larry Johnson since we talked golf and to the booth babes as well.  Stay tuned to our Twitter feed for updates from the floor. Looking forward to a day two in the morning.