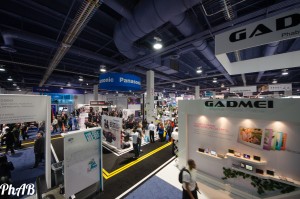 The Consumer Electronics Show (CES) marks what new technology to see and expect at the beginning of each year. Sadly, no hover boards and flux capacitors were found at the show this year. There were plenty of TVs, drones, home automation, VR/AR sets, wearables and more for attendees to see and plenty of people working around the clock to find the next toys and gadgets. But it does not have to be all work and no play. Plenty of booths had some entertaining games, while others had some interesting quirks that have not been in the limelight yet. Here are some of the fun and the weird highlights found at CES 2015.

Creative Audio had plenty of sound booming throughout South Hall. But what else was booming, was the voice of an enthusiastic presenter. The presenter had one thing to sell to the attendees, the Creative Audio Roar, a portable Bluetooth speaker. Besides his wacky movements and sales techniques, the real reason to watch the presenter is for a chance to win the Creative Roar and other prizes.

Bitcoin’s booth wasn’t a surprise to see at CES due to the huge noise it made in 2014 only seems fitting we find them here.  Bitcoin had a few companies relating to anything Bitcoin, but what was great about the booth was the free swag. Who can say no to a cute little teddy bear? At the booth there were also pens, stickers and a USB car charger. But the main focus should be on the teddy bear waiting at the booth. 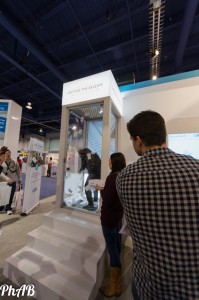 Have you ever wished to be in one of those money booths where you have to catch money blowing around you? Well, American Express does have a money booth…but filled with receipts instead. However, some of those receipts have a winning prize code and participators can get a T-shirt or even a $25 and $50 American Express gift card!

The first floor of South Hall had plenty of massage chair booths for show, but mainly there for those tired attendees who need some stress-free time for themselves. Usually there are long lines toward the end of the day, but could be worth the wait. 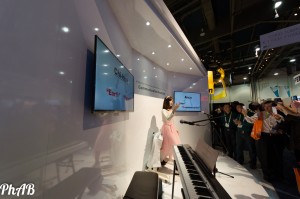 This booth has the strangest attraction of them all. An android that talks. Words cannot describe the android. Just visit and bask in the strange awe of this machine.

Oculus had demos for their VR headsets, but the lines do get pretty long. Make an appointment through their app and forego waiting in a long line.

The first floor South Hall had many gaming booths. A booth had a couple of sweet pinball machines for attendees to play and bring back the nostalgia of the arcades and the loud noises it brought along. Snail’s booth had some games on demo. Take a seat and relax (while being sold on why these games are the best).

Samsung had a satellite booth just for their Galaxy lineup and sponsoring the new Marvel’s Avengers movie. Take a selfie with the Hulk or other characters and you can get a picture printed on a T-shirt. Also, test out Samsung’s own VR headset at the booth. 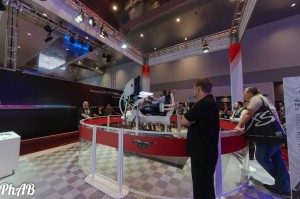 Ford offers some raffle prizes when participants visit every booth they have. It does get tiring and repetitive, but free Mustang logo pins are handed out as well. One of Ford’s satellite booths has a 360-degree motion racing game and playing the game also nets a free T-shirt.

One of the more stranger, but entertaining games to watch. Have a head-to-head RC car drag race using not a remote control, but your brainwaves. Yes, the brainwaves emitting from your own head! A brain sensor is set upon your head like a crown and then the sensor is calibrated to a point where the machine can react with a specific brainwave level telling the car to go. Definitely a challenge and a unique one at that.

Tiffen provides a lot of video and camera supports and other accessories. They have a raffle going on every two hours for anyone to win one of their products. However, only one participant is offered to spin-the-wheel and win a prize. 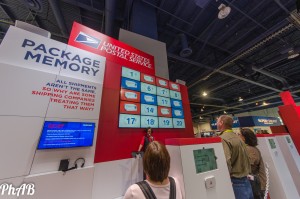 United Postal Service also had a booth of their own and the first thing that caught attendees’ attention was head-to-head match of a memory game. No prizes were handed out, but playing the game allowed those participated to be in a raffle for Bluetooth headsets. There was also a picture booth where participants can get their own pre-paid postcard printed.

Ever wanted to have your own 360-degree bullet-time, Matrix moment? Nikon set up a large stage to capture you at your best (or most embarrassing pose) and have everyone passing by and waiting in line to see your moment. 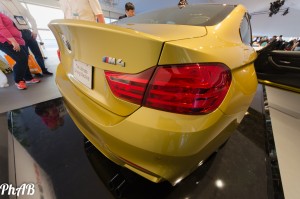 Arguably the best booth for fun at CES. Take a test drive (yes, test drive) with a few BMW cars. The M3, M4, 235i and the i3 are all available for participants to drive and experience some surprising and remarkable cars. Post their hashtag and you can win a chance to drive the new i8 as well. This is a must-visit booth at CES. Plus, there is free food and drinks to enjoy while you wait.

There is much more to see, but take some time off and explore some of the fun things companies have to offer at their booths. It should not be all work and no play. Then again, it is a great marketing tactic for them as well…