Could Lack of Apple Innovation Cause an Exodus? 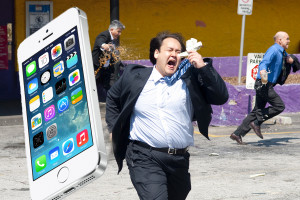 Last night, I was knocking a couple back with a friend at The Waterfront (San Diego’s oldest continually operating pub). This buddy of mine, Jordan, is a long time iPhone user. He hopped on iPhone, iPhone 3Gs, and the iPhone 4s. He was waiting to upgrade to the new iPhone this year, since the iPhone 5 was overlapping his contract, and so forth… the usual.

I brought up the 64-bit processor, and his response was the one you’d expect, “but it’s the same looking iOS as usual, maybe it’ll be faster, but speed isn’t the issue for me, I was hoping for higher-end features”. He then continued to list of elements of the Galaxy S4 and the possible upcoming Note 3 release. His main thing; easier access to important stuff via Widgets, and “beast” specs that he can relate to.

This may be anecdotal, or coincidence, but I’ve heard/read this same style of response for a number of existing iPhone users in IM, in person, etc over the past day. None of these iPhone 4/5 users want the iPhone 5c, it feels like a downgrade, and with the “amazing camera” and fingerprint reader (the only things consumers can really relate to) – the iPhone 5s just doesn’t appeal to these guys, and they’re hardcore Apple fans. They want something “more” and this reminds me of the one thing Apple has a really hard time doing, and always has had a hard time doing: breaking out of their marketshare.

Closed systems are tough to maintain, when you’re competing against “everyone else”, its nearly impossible to keep up. Sure, you can make claims that your devices are the “most forward thinking whatevers” on the planet, as noted in the Apple Keynote, but at the end of the day – if you don’t have hardware manufacturers pushing your software to its limits and iterating therein to do better, stronger, faster in a hungry, highly competitive market – it’s only a matter of time before a large number of your user-base can “graduate” from your system.

The immediate solution for Apple is to find another market to enter, as expected that market is China. To win in China, there’s either “be affordable” or(and) “be national”. The Chinese market is very nationalist, and last I checked Foxconn wasn’t a pillar of workplace excellence, but whatever about that – how about “affordable”… off contract, the iPhone 5c 16GB is still some $600 USD. I’m not sure who was smoking what over at Apple, but even at the consumer level, we can search Xiamoi on Google, and get unlocked, fully loaded, beast-mode, phones for $300 USD state-side, let alone inside of China’s borders. This is going to be a problem.

There is no doubt, the $1200 USD off-contract iPhone 5s 64GB will sell to a number of people who have the desire of burning a Macbook Air’s worth of coin on a phone that doubles as a status symbol. There’s also no doubt this luxury item will sell in 16GB and 32GB versions for that same status-symbol feel. But for mass-market spread and appeal; I can’t put it together — and apparently, for those current iPhone lovers I’m friends with (save for two), the options outside of Apple are looking better now more than ever.

I’m not going to pretend I think Apple is a fantastic company… ever. I still don’t own any of their software, hardware, or otherwise. I still don’t even know what iTunes looks like, and I’m pretty certain I don’t even have Quicktime installed.

That said; I absolutely do not agree with the mantras “Apple should die in a fire” or “Apple customers are inferior”. The days of Apple bashing to the point of near religious-fundamental aggression are far dead to me and thankfully so. My technology decisions and workflow are the ones I’ve chosen, and they work for me as I created them; as should everyone else.

I am, however, concerned that a company, as big as Apple, with a residing headquarters in my state, supplying my home-nation’s GDP with ridiculous volume, is making such seemingly harmful and haphazard decisions post-Jobs around its product, its brand, and its future growth.

So if any iPhone users (present or future) would like to appease this concern a bit in the comments below about your plans to camp out in front of Apple Store XYZ, fire away; but moreover, I’d like to read any additional thoughts around the iPhone 5c/5s from people looking forward to buying one/both…