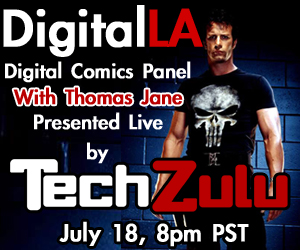 TechZulu and Digital LA have a real treat for all you comic fans out there!  We have actor Thomas Jane (Hung, Punisher), Marvel, Graphic.ly, Dan Fraga, Joelle Sellner, and Hal Hefner.  Join the discussion with digital comics, animation and games experts for the third annual Digital Comics panel. We’ll discuss how comics and comic book characters are part of an overall entertainment franchise, including animation, games, movies, iPad apps, web series, and promotion via social media.

This will all be streamed right here on TechZulu for those will not be able to make it.