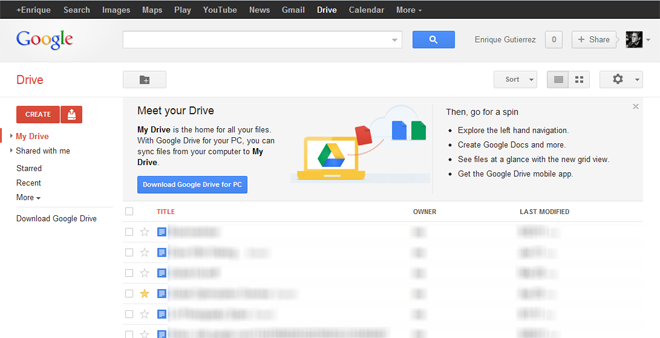 Google Drive is a cloud-service for files that offers 5GB of space to use however you wish right out of the gate for free. The first question that came to mind, personally, was “How do I get more if I need to?” The simplest answer isn’t “spam your friends on Facebook and Twitter to get’m to use your referral code”, it’s “show me the money”. Apparently, Google just piggybacked the Google Drive storage space expansion off the already existing Picasa Web Albums service.

This is actually great for those that purchased extra space for the Picasa Web Albums prior to Google+ launching. Before there was “plus”, Picasa only allowed for 1GB of photos to be uploaded, unless you purchased more storage space. Google Drive sharing that space will allow those users who have it to simply use it for stuff other than just photos on Picasa. 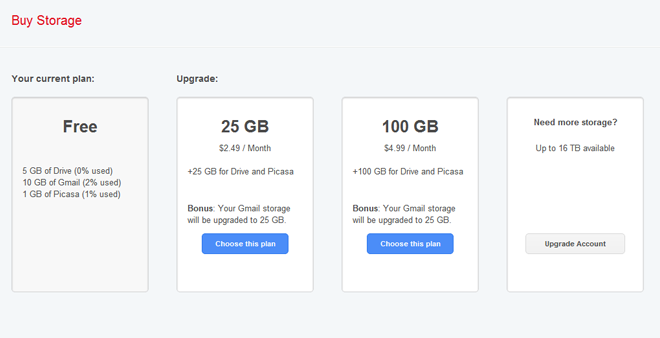 Whenever you upgrade your space in Drive, your Gmail inbox gets extended as well, from 10GB to 25GB. It’s like magic. It should also be noted, 16 terabytes is a whole lot of space… 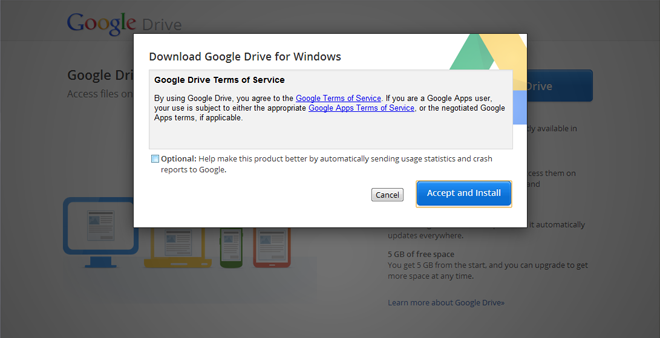 Installing the Google Drive desktop app is very simple, like most installations. You may want to change which folders get automatically synced between Google Drive and your desktop/laptop. If you have already gone through the installation process, you can update this in the application’s preferences. 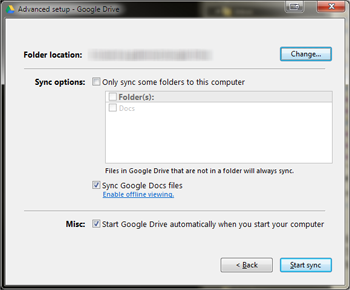 The “Advanced” option in the installation process allows you to change the Folder Location where the sync will occur, meaning – it is going to create that folder on your local computer, and will pull down whatever you have in Google Docs / Drive, into that folder.

If you want the application to only sync certain sections of your Google Docs / Drive, specify that in the box below.

The opportunity to activate Offline Viewing is a bonus, but will take up more hard drive space.

Additionally, to keep things seamless and smooth, “Start Google Drive automatically when you start your computer”.

Within a few moments of clicking “Start sync”, you will see your system go through a short installation process, and you’re off and running. In Windows 7, the installer automatically placed an icon on the Desktop, and placed a shortcut to the folder in the Favorites library list.

To test it out, click the Google Drive folder on your computer, create a folder, and watch it appear within seconds in the web-interface. Same goes for deleting files, and dropping any file into that folder. I placed a few Photoshop files, balsamiq mocks, and a couple PDF’s into a new folder for a project I’m working on. Within seconds, the sync was complete, and I was able to access those files on my laptop.

This is going to become an inevitable debate for as long as the choice exists. To debunk the argument immediately, I say, why choose? At least in Windows, it’s a difference between a folder that says “Dropbox” or “Google Drive”, files will live in both. The services are comparable, but Google Drive is heavily integrated with all the amazing collaboration features of Google Docs by default, so each service will more than likely end up being used in slightly different ways for everyone… or they’ll both end up being storage spaces filled to the brim, enabling us to become digital-age packrats of sorts, in need of a Clean-Sweep intervention.

It’s fast. The installation was a breeze on both desktop and laptop. After a fast update on the Android (2.3.4) it was ready to go. 5GB isn’t a bad start and it’s free. Can’t really complain about that. $4.99/mo for 100GB of docs and file space in the cloud, synced, backed up, and accessible from anywhere is a pretty decent deal.

When it comes to DropBox or Google Drive, I have Google Docs already on both personal and business (Google Apps) accounts, so moving to Google Drive is a no-brainer, but moving away from DropBox won’t happen; if I were a paying customer to DropBox, it would be a matter of cost over time. Collaboration and sharing still exists on Google Drive, as it does in Google Docs. I fail to see the difference, but I would pay for Google Drive far before I paid for DropBox, simply because the infrastructure of my online organization is already invested in Google Docs and Gmail.