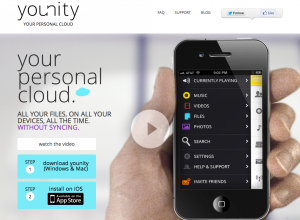 Entangled Media has released their public beta to Younity, a new utility that provides spontaneous access to your data across devices. As mobile devices become both increasingly common and just as increasingly diverse, many are finding that keeping data synched between them to be a daunting and time consuming task. Younity’s new mobile product lets you bypass that hassle while offering several other benefits.

Like Dropbox and its contemporaries, Younity is an online backup/access utility, providing on the go access to files via the web. Unlike Dropbox, Younity does not store data on their servers. Instead, Younity gets unique by providing users access to their own personal cloud. When installed on either a desktop or laptop, Younity’s software scans the local drive and links files to an account which can then either be downloaded or streamed to a mobile device tied to the same account. The streaming option is terrific as it doesn’t require all shared files to be mirrored on multiple devices, thus freeing valuable storage space while on the go. By keeping everything right where it is users are given spontaneous access to everything they need. Music, playlists, videos, pictures, everything is available at the touch of a digital button.

Erik Caso, CEO of Entangled Media states that Younity was created out of Necessity. Like many people, Eric had concerns with handing his data over to a third party. With cloud based backup solutions, users must place inexplicit trust in the company that is storing their data. Entrusting a company to keep data secure is not always the best option, even corporate giant Sony had to deal with the personal data of its users being accessed by hackers not too long ago. Since the most prolific hacker groups seem to be attacking large data centers for personal information, leaving the majority of one’s files on a central home server  reduces the risk of hackers gaining access to ones files. 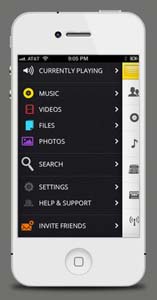 Younity also excels at ease of access. The UI (User Interface) is simplistic user friendly. Instead of being inundated with menus and device lists, Younity gives access to just the data. The mobile screen displays an organized list of music, videos, files data and search. As users browse through their pictures they are presented with option to download a copy of the file to the device they are using with the push of a button. Younity’s ability to stream music and video is another hot feature as it is able to check the resolution and data connection of the viewing device and optimize the content to limit the bandwidth used.  Younity is obviously concerned with saving users from consuming their monthly data caps, the mobile software is set by default to restrict using the cellular data connection and instead attempt to use Wi-Fi, and nobody wants to meet their monthly bandwidth allotment by watching a video as they wait in line at the bank.

Younity is a terrific answer to an increasingly common problem dealt with by people with large media libraries, limited data caps and care about privacy. It is still in beta and their mobile product is already poised to dominate the market. We look forward to watching this innovative piece of software grow and so should you. Head on over to their download page , watch their video, try it out and let us hear your opinions in the comments.