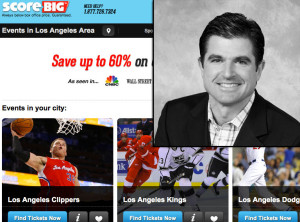 ScoreBig, an online marketplace for tickets for live sports, concert and theater events with a guaranteed savings of up to 60 percent for event hosts, February 7 announced Scott O’Neil has joined the company’s advisory board.

Scott O’Neil, is a former president of the Madison Square Garden. O’Neil was senior executive for pre-eminent sports and entertainment brands such as Madison Square Garden (the New York Knicks, New York Rangers and New York Liberty), the Philadelphia Eagles, and the National Basketball Association.

With over 20 years experience, O’Neil joins an equally strong team of world-class industry leaders and leading investors such as David Goldberg, former Ticketmaster EVP; Gideon Yu, president of the San Francisco 49ers and former chief financial officer of Facebook and YouTube; Shari Redstone, vice chairman of the board of Viacom and CBS; Finn Wentworth, former president and chief operating officer of YankeeNets; and Cheryl Rosner, former CEO of TicketsNow.com and president of Hotels.com.

Adam Kanner, ScoreBig.com CEO said,“Scott’s strategic insight and track record of building exceptional businesses will be an invaluable asset as our business continues to scale quickly.”

Kanner was pleased that O’Neil has agreed to join an incomparable team of advisors, directors, investors and management dedicated to solving the two biggest issues facing the live entertainment industry today – filling seats in brand-protected manner and bringing back casual and price sensitive fans by increasing the affordability of live event tickets.

According to O’Neil unsold ticket inventory is a major problem for the live events industry but to ScoreBig.com, it is a big opportunity.

O’Neil said, “ScoreBig.com is the only business that offers consumers deep savings on tickets in a way that protects the brand of the property and the integrity of full-price sales.” O’Neil believes that over 500 percent growth in the last year, ScoreBig.com amazing capacity to revolutionize unsold ticket inventory.

He added,” I’m thrilled to be joining the team at ScoreBig.com and look forward to supporting its continued growth and success.”

O’Neil is not just another leader but is known for his great traits in his years at the Philadelphia Eagles, National Basketball Association and Madison Square Garden.

He established a reputation as a decisive leader and change agent, growth driver and builder of world-class organizations.

As the president of Madison Square Garden Sports, he grew the outfit’s revenue by over 40 percent and oversaw the business operations of The Madison Square Garden Company’s (MSG) three professional sports teams, the New York Knicks, New York Rangers and New York Liberty, leading some of the most coveted brands in sports.

At NBA, he was instrumental in NBA teams combining to set the all-time record for regular and postseason gate receipts, attendance and sponsorship revenues during multiple seasons.  O’Neil was a driving force in creating a culture of sharing best practices that became the gold standard in how leagues and teams can work together to collectively lift the total business.

Prior to NBA he oversaw the launch of HoopsTV, serving as the company’s president and helped raise $15M and challenged the NBA for digital thought leadership in basketball.  Earlier in his career, O’Neil honed his sales and marketing expertise with the Philadelphia Eagles of the National Football League, where he became vice president of sales, and the New Jersey Nets, where he began his career as a marketing assistant.

He brings to ScoreBig.com the much needed expertise for marketing and growth.

ScoreBig.com, headquartered in Los Angeles, Calif., is backed by Bain Capital and U.S. Venture Partners and was recently recognized by Forbes as one of America’s Most Promising Companies and by Billboard as one of the 10 Best Start-ups of 2012.

The 2009 founded will  be better placed to help customers pick their own price on seats from the floor to the rafters, always pay less for FA Cup Final Tickets than box office price, and never pay any fees and as well  help its partners move unsold ticket inventory, protects their brand and as well make sales.