From Groupon Payments to Acquiring Savored To Up Its Yield Management 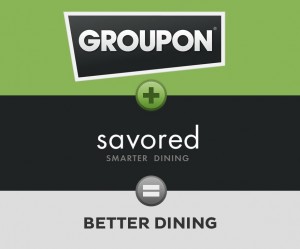 Just days after launching its credit card payment service, Groupon acquired Savored  a leading provider of reservations with more than 1000 top restaurants across the United States using it. This is set to complement Groupon’s efforts in yield management due to its 40 percent discounts for each table .

Serves Over 1000 Top US Restaurants

However, Savored says it will continue to serve diners and restaurants independently even with the acquisition and is giving a  free 30 day trial for new merchants.

Savored is a win for both merchant as they get their restaurant tables full as we dine while an automatic discount awaits us.

On the acquisition, Dan Roarty, VP of Groupon Now said, “Savored’s platform nicely complements Groupon’s efforts in yield management, an area we’ve pioneered with Groupon Now!,” and added, “We look forward to working together to achieve a common goal – making dining out even more fun and affordable for consumers while helping restaurateurs manage inventory and grow their businesses.”

Groupon said it launched the system  due to customer demands.

“In the past, our merchant partners have often told us that their traditional payment systems are expensive and cumbersome–so we stepped up to the plate and developed our own payments service guaranteed to be the simplest and lowest cost option for Groupon merchants to accept credit cards.”

Made for merchants Groupon Payments is available on the apps store for the iPhone and iPod Touch and will used for any credit card transactions by all Groupon merchants.

According to the company, merchants can use the online Groupon Payments Center to follow transaction history, check daily sales reports, track deposits to an account and analyze revenue trends.

Groupon will give a free audio jack card-swiping device and for a high-volume card reader, a dedicated support team available by phone and email throughout the week.

The Groupon Payments credit cards were piloted in the San Francisco Bay area and are charging as little as 1.8 percent per swipe to beat the competition.

Groupon  was founded in 2008 and is headed by Chief Executive Andrew Mason and claims to have helped over 250,000 businesses grow.