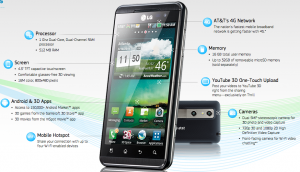 3D Movies, 3D Printing, 3D Televisions, 3DS, our entire screen world is turning 3D and now its time for your mobile screen to get in on the fun.  LG 4G Thrill is one of the first mobile devices in the United States to have 3D viewing capabilities without the glasses.  It was first introduced earlier this year at CTIA where LG announced that the 4G Thrill was going to be available on AT&T for $99.99.  Over the past few weeks I’ve been carrying the LG Thrill 4G around everywhere.  I wanted to find out if the 3D effects were useful and people would enjoy playing with or was it just something to tack on to a mobile device to try and increase sales?  Does calling it the “4G” Thrill really mean its faster in the data speeds department?  We answer these questions and really dive into the LG 4G Thrill in our review below. 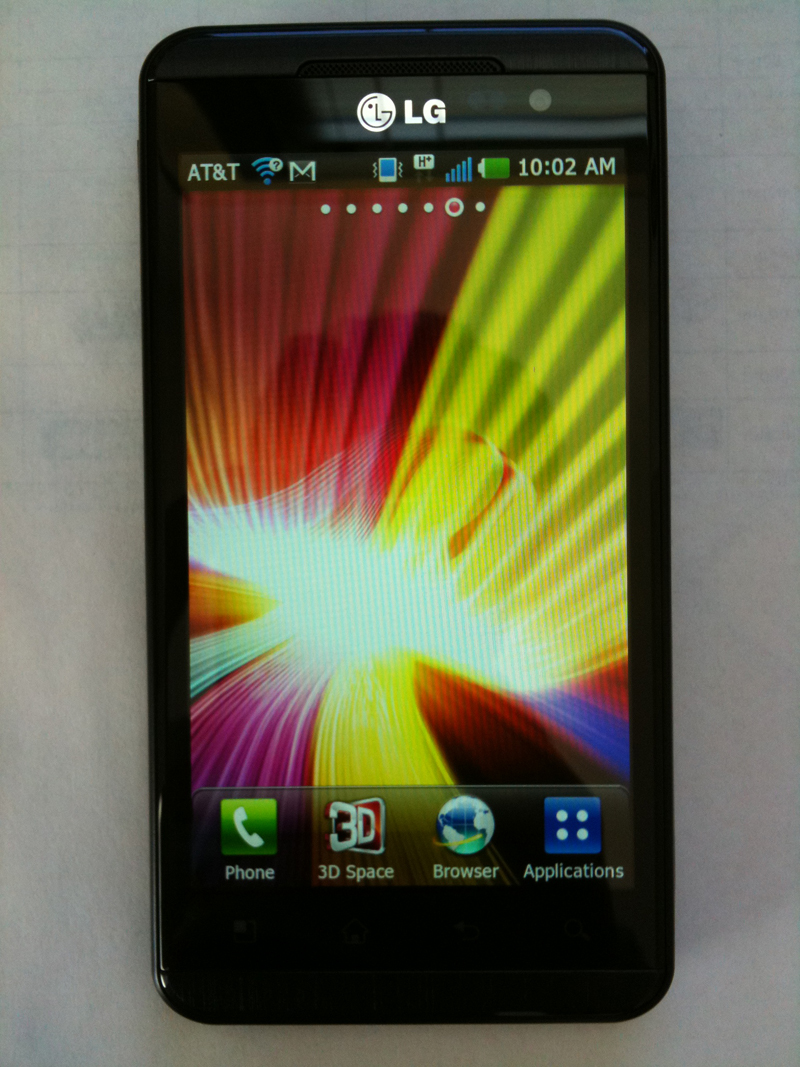 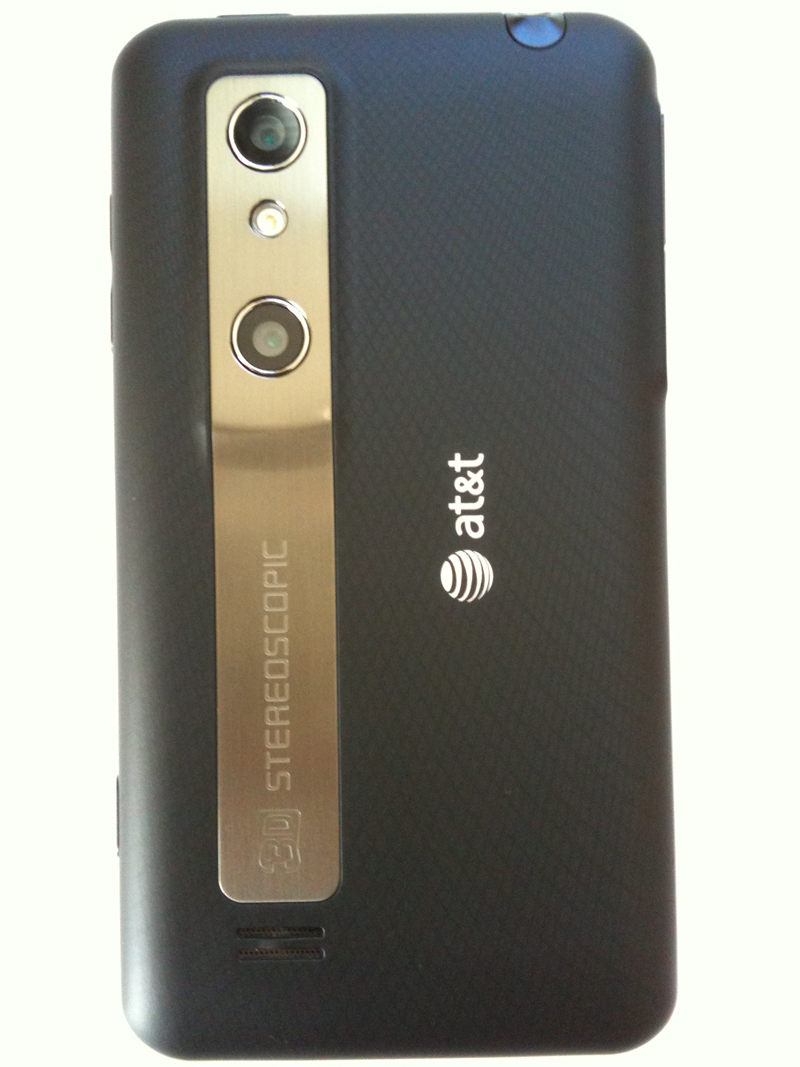 The front of the phone has a very sleek look with black faux-brushed metal accents around the screen and the back has a matte black design with a faint cross-hatch etching. The back of the Thrill 4G is also where you will find two camera lenses for recording 3D content, and a single LED flash. A 3.5mm headphone jack on the top of the Thrill 4G and microUSB and mini-HDMI on the left side of the device. A sleep/power button on the top and finally a single button on the right side of the phone can be pressed to quickly enter the phone’s “3D Space” application.  No need to run off and buy a HDMI cable because AT&T was kind enough to included an HDMI to mini-HDMI cable, allowing you to connect the phone up to your TV right out of the box.

Out of the Box the LG Thrill 4G runs Android 2.2 (Froyo) but there is an Android 2.3 (Gingerbread) update in the horizon.  LG overlays Android with its own user interface. Some people are opposed to having companies overlay android rather then leaving it as a pure google experience but it honestly doesn’t bother me that much.  There are also 3D specific applications that LG has loaded on to the phone.

Equipped with 2 5-megapixel camera’s The Thrill 4G’s is capable of shooting in both 2D and 3D modes. While in 2D mode you can shoot 5-megapixel photos and record a video in 1080p HD.  In 3D mode you can record 720p HD video in 3D and snap 3-megapixel 3D photos.  The video comes out really well.  Below is a 3D video I shot at Disneyland while on the Big Thunder Mountain ride.

Snapping 3D photos was fun and I got tons of friends to do funny posses to really make them look like they were popping out of the screen.  Make sure you have some decent lighting however, when taking the photos.  Oh, and forget trying to shoot 3D photos in the dark.  Although there is a LED flash on the phone and you can get it to stay on in 2D mode it does not even try to come on in 3D mode.  I took lots of photos and the best ones always were the ones where I had someone or something really close to the camera and still was able to capture the background as well.  If you simply snap a photo with no real focus the picture comes out looking like it has some depth but it doesn’t give you the full 3D effect like its popping out of the screen. 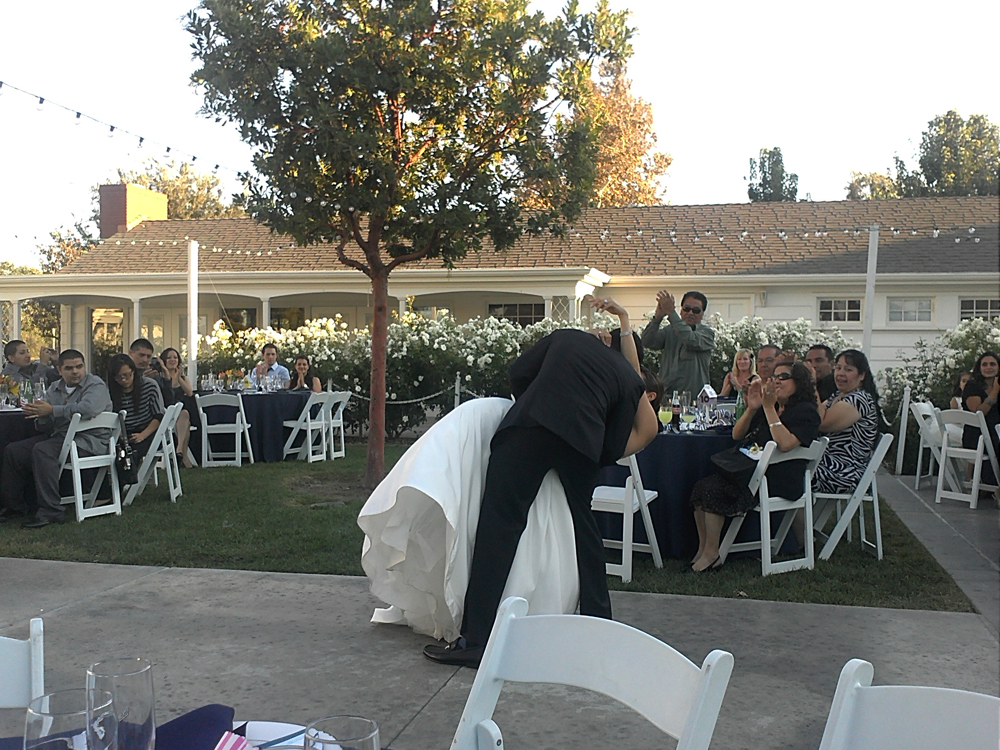 As stated earlier 3D has not caught up to the masses yet and I would have loved to view all my 3D videos and photos blown up on a 3D TV, but unfortunately because I do not own one I was unable to.

The call quality during my use was surprisingly good.  Every call I made sounded clean and clear. The same goes for the receiving end, as I would ask if they could hear me okay.  I was able to test out the Thrill 4G all over Los Angeles, Orange County, Riverside County, and San Jose, CA. No issues in any of these 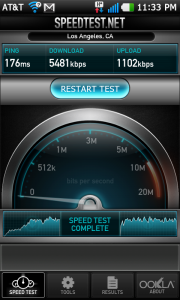 The LG Thrill 4G runs on AT&T’s HSPA+ “4G” network. On average I was getting about 5.5Mbs download and 1.1Mbs Upload.  I’m happy to report that I was geting these speeds at almost all my locations.  I was able to get tons of stuff done using productive apps, sent emails, Facebooked and Tweeted all without experiencing any delays. I was very happy with the data on this phone.

I was more than impressed by the quality of the 3D imaging on the LG Thrill.  If you all remember our impressions of the Nintendo 3DS review, it was fun but the gaming experience on a few titles was hard to tolerate. Screen quality negatively affects the 3D appearance, making images more blurry, and the extra dimension is defeated.  Not so with the LG Thrill.

LG included a full 3D menu that allows you to quickly browse 3D YouTube videos, 3D pictures and videos in your gallery, and fast access to 3D games.  All of which offer a pretty amazing 3D picture, especially for a mobile device.  Both picture and video are clear and crisp, and looking at the LCD screen is like looking into a mini diorama. Colors are pretty vibrant, and movement is caught and played back smoothly. (see my roller-coaster ride video above.)  As testimony to this, I was out at a Los Angeles club one night, taking lots of pictures with the phone, when a man who’d been standing behind me (a good 3-5 feet) noticed the 3D qaulity. He was surprised and excited that there was such a device, and even more enthusiastic about how realistic the picture quality was. He introduced himself to me, and turns out he’s a professional photographer! 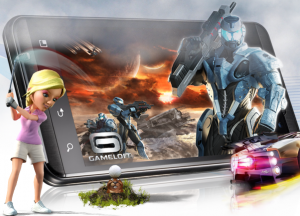 The games included do a good job giving you that 3D experience also.  I didn’t get any of the confusion or dizzyness that sometimes comes with playing 3D games.  The games, as the camera function, does an excellent job of rendering high quality 3D picture.  I must honestly say that I had more fun playing Let’s Golf 2 in 3D over first person shooter N.O.V.A.  (N.O.V.A’s a great game but first person shooters always get me a bit dizzy when playing in three dimensions.) There are a few more 3D games but you’ll need to buy them to keep the 3D gaming experience going.

As a bonus for the 3D enthusiasts out there, there is a YouTube application that is dedicated to 3D videos on the LG Thrill 4G.  This is a great way to share the 3D videos you create, as your friends will undoubtedly be excited about seeing themselves in the third dimension (as mine were), however,  for the most part you can only send out 2D versions, as most people have yet to carry or own a 3D viewing device.  Despite how awesome it is, 3D still has a ways to go with the masses….but I believe this device will definitely start trends.

I’m a pretty heavy user, so battery life is always an issue.  The Thrill 4G is no exception.  I was not able to get halfway through the day without plugging in for a charge.  When I was heavy on the 3D usage that even shorten the Thrill 4G’s day.  Obviously your battery life is dependent on how much you use the phone, so with very little usage, mostly calling and a some lite tweeting and using Facebook I was able to get through a full day.

Overall the Thrill 4G is a solid device and stands out from the pack with its 3D recording and display.  Currently, 3D personal devices are very much a novelty, and between the picture-taking capabilities, photo galleries, and gaming, anyone who catches a glimpse of the phone is instantly intrigued.

Call quality was great and the data speeds were more then satisfactory.  If you’re in the market for a phone that can actually make phone calls, and also get emails made and delivered quickly and efficiently, this would be a phone seriously worth considering.  For the $99.99 price tag, you’re getting a pretty great deal, a very reliable device, and countless hours of entertainment.