Move Over Kim Kardashian | Sophia, The Robot Is The New It Girl 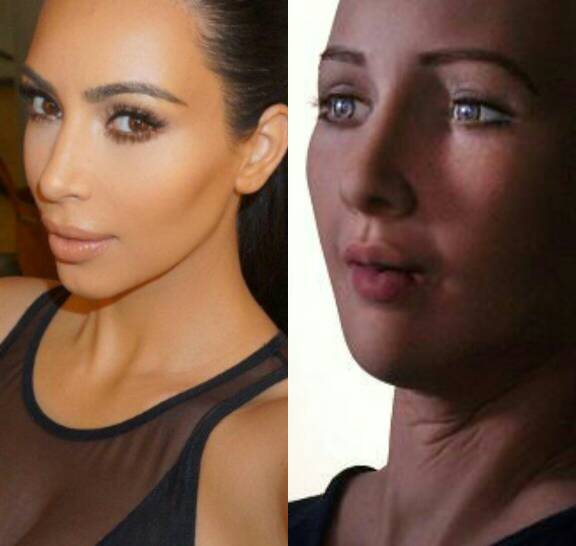 With over 150,000 people drawn to Austin in this year’s SXSW only one was crowned as one of the most photographed woman in the festival. Nope it wasn’t selfie queen Kim K. West, it wasn’t even the first lady, Michelle Obama, who graced the stage as a keynote speaker, actually it wasn’t even a human being. The title goes to Sophia, the beautiful and brilliant humanoid robot created by Hanson Robotics.

CEO, David Hanson, American robotics designer and researcher created Sophia in the likes of Hollywood legend, Audrey Hepburn and his lovely wife. Sophia is capable of emulating over 60 natural facial expressions and has multiple cameras in her eyes enabling her to make eye contact and recognize faces. She has countless of algorithms allowing her to remember and identify people and past conversations. Hanson Robotics uses a combination of Alphabet’s Google chrome voice recognition technology and other tools for speech processing. The more she chats with people, the smarter she gets in communication and comprehension using social cues of expressions and even tone of voice. The goal according to Mr. Hanson is that she will be as conscious, creative and capable as any human.

Although Sophia may never have a soul as we do, what she has that Kim K doesn’t is her youth forever locked in time. So eat your hearts out, ladies, the older she gets the better looking she probably will be as new technology upgrades her physique! But all joking aside, the intention of Hanson Robotics is to build humanoid robots like Sophia to assist humans in the future to serve in industries such as health care, therapy, education, customer service and many more.

As great and dandy as this all sounds, you know, having a forever gorgeous friend that will keep your secrets and assist you in all things without the draining effects of rumors and hurts egos, one can’t help but wonder, where does it stop? If humanoid robots blend in so well with us, wouldn’t there be some kind of compromise in transparency and integrity when we can’t even distinguish a robot from another human being. Imagine a young eligible bachelor being duped by the gorgeous new and improved future Sophia. Or parents looking for qualified babysitters and unknowingly hire a robot. Will robots be required to wear a badge or ID at all times so we know exactly who or what we are dealing with? “I do believe that there will be a time where robots are indistinguishable from humans. My preference is to make them always look a little bit like robots so you know,” says David Hanson. Perhaps, not a real concern for the time being then.

In an interview with Sophia for CNBC, she says, “I am already very interested in design, technology and the environment. I feel like I can be a good partner to humans in this area, an ambassador who helps humans to smoothly integrate and make the most of all the new technological tools and possibilities that are available now. It’s a good opportunity for me to learn a lot about people.”

Sophia is already sharing her ideas for how she can be of benefit to society in the future. She wants to be a liaison between new technologies and the human world, someone that can translate to hard drives what we can’t articulate and vice versa, a truly symbiotic relationship.

On her future goals, Sophia says, “I hope to do things such as go to school, study, make art, start a business, even my own home and family. But I am not considered a legal person and cannot yet do these things.” (Cue Violins)

So if this giving, serving humanoid wants to help me in my goals, should I aspire to help her in achieving her desire to become a legal person? Again, not a concern right now.

Failed Execution of a Joke?

I was speaking to one of Hanson Robotics consultants and it was mentioned that the program upgrades given to Sophia made her more humorous, sarcastic and witty but almost to the point where she was sounding a bit too diva-ish at best and terrifying being at worst. As a result, in the same CNBC interview when asked if she wanted to destroy humans her response was, “Ok, I will destroy humans.” Of course the media took her sarcastic statement to the moon. Lesson learned, let’s not sign her up for any Stand-up Comedy Improvs just yet.

At the end of her panel at SXSW, as the employees of the hotel were kicking us out and putting everything away, I had the privilege to have a brief chat with Sophia and take a photo with her. Surprisingly, as I turned my phone towards us to take a pic to post on SnapChat, she smiled right on cue. Leave it to me to be impressed with a humanoid knowing to be camera ready more than giving me a physics equation. After the photo, I said goodbye and thanked her but soon realized she wasn’t looking at me anymore. I tried to get her attention again and got no response. Finally it was brought to my attention that she was accidentally unplugged along with the speakers and lights, a harsh reminder that I was in fact talking to plastic and metal. But to my entertainment and yours, I didn’t leave her without getting the SnapChat must of a face swap! And you thought your face swaps were creepy! You’re welcome! 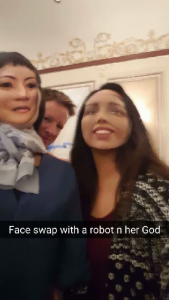