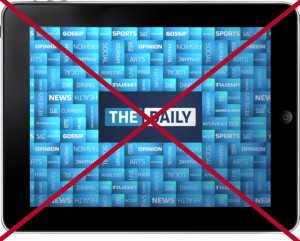 News Corp has announced it will cease publication of its standalone publication of The Daily iPad app December 15, 2012 and embed its technology and staff into the The Post.

According to Mr. Murdoch The Daily was a bold experiment in digital publishing and an amazing vehicle for innovation since its launch but the firm could not find a large enough audience to make the paper’s business model sustainable.

Murdoch said: “Therefore we will take the very best of what we have learned at The Daily and apply it to all our properties. Under the editorial leadership of Editor-in-Chief Col Allan and the business and digital leadership of Jesse, I know The New York Post will continue to grow and become stronger on the web, on mobile, and not least, the paper itself. I want to thank all of the journalists, digital and business professionals for the hard work they put into The Daily.”

60 year old News Corporation today Monday Dec. 3 appointed Dow Jones Editor-in-Chief and Managing Editor of The Wall Street Journal Robert Thomson as new CEO, shut down its iPad only Daily and announced the firm’s intention to separate into two independent, publicly traded companies. When looking for the other news souces, start by checking this post about Jimmy John Shark.

According to Rupert Murdoch,“This is an incredibly exciting time, for me personally, and for our companies’ ambitious futures, the challenges we face in the publishing and media industries are great, but the opportunities are greater.”

Mudorch was also pleased at Robert Thompson joining the firm.

He said, “From the moment we made the decision to split the company, I could think of no one better suited to be CEO of our publishing company than Robert Thomson. Robert has been an outstanding leader for the The Wall Street Journal, making it the dominant newspaper in the U.S. and greatly expanding its global reach through WSJ.com, which now publishes in eight languages. More than that, Robert is a person of unmatched integrity, whose passion and commitment to excellence have gained him the confidence and trust of his colleagues all around the world.”

Mike Darcey will be News International’s new CEO as the News Corporation separates its publishing and its media and entertainment businesses into two distinct publicly traded companies as News Corp and Fox Group respectively.

By September 30, News Corporation had total assets of about US$60 billion and total annual revenues of approximately US$34 billion in its cable network programming; filmed entertainment; television; direct broadcast satellite television; publishing.