From Nothing to Something with Howard Marks & Nanxi Liu 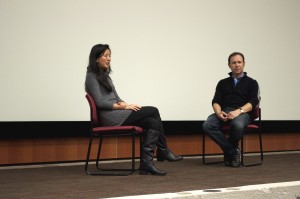 Wednesday November 20th, 2013 was a special day for the technology entrepreneurs at the University of Southern California. The USC Entrepreneur Club and the Kairos Society brought Howard Marks, a successful entrepreneur and founder and CEO of StartEngine, on campus to speak about his past experiences.

Event organizers Daniel Gross, Regional President of Southern California for the Kairos Society, and Zachary Goodman, President of the USC Entrepreneur Club, kicked off the event by introducing their respective organizations as well as their future plans to host other events. They proceeded to introduce Marks to the audience.

The Time Is Now

“We live in a generation of startups,” Marks began. He described why the time is so ripe for innovation and why this was a great time to build startups. He continued to tell the stories of his past, illustrating different lessons in each story. For example, he explained a situation where his company could not meet payroll the next day and was about to go out of business. Luckily, he was able to talk to Steve Jobs, who offered to sell their product at an event. It was a success and the group made payroll. “The difference between success and failure is hair thin,” Marks pointed out.

Marks continued to talk about his past and then talked about the startup landscape in Los Angeles. He then gave some advice to the students, and invited Nanxi Liu, CEO and Co-Founder of an interactive digital billboard startup called Enplug, to the stage. Liu began by talking about her background, eventually explaining how she sent an email to Marks to get into StartEngine in a no Wi-Fi zone. “A lot of things wouldn’t have been possible without StartEngine,” she said. 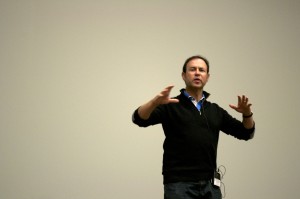 The two entrepreneurs then moved on to talk about college. “My job is to help you not get a job,” Marks announced. “When you go to USC, you don’t need a job. It is because you are talented.” Liu added, “When I was in college, I built a bunch of stuff. Then, when I was out of college, I was prepared and wouldn’t make the rookie mistakes.”

Liu then spoke about her entrepreneurial journey and her experience with StartEngine. “I’m always hustling Howard for more contacts,” she said. “Every introduction I get, I chased after. I built up credibility.”

Marks and Liu finished by talking about LA as a whole. LA had a lot of movies and consumers, and now many believers in tech. Investors in LA are not jaded and are still very receptive to ideas, unlike in Silicon Valley. LA is up and coming and is a great place to be because everybody is helping each other out. It will soon be the technology city of choice.

During the question and answer session, the two speakers encouraged people to learn to code. They also covered how to get involved in college and when to drop out.

After the event, I was able to interview Marks and Liu.

What was your favorite memory as an entrepreneur?

Marks: When I started my first software business, still in college, and was asked to meet Steve Jobs at Apple to show them our new Apple ][ software called Jane.  He was impressed and gave us a lot of advice.

Liu: There are so many great memories! There was one particular memory that stood out, which was when my co-founders and I first started our company. We were living together in a one bedroom, one bathroom apartment with no air conditioning and an ant infestation. It was the morning of June 26th, 2012. We were going to be interviewing with Howard Marks for his incubator, StartEngine, in the morning. All of us fought for the shower and by the time I got to take mine, there was only cold water left. We then crowded into David’s car and took the 45-minute long drive to StartEngine. On the car ride there, we were joking around and coming up with the most ridiculous answers to questions that we thought Howard might ask. I treasure this memory because it seemed like a life-time ago, even though it was really only just over a year ago. But that’s what startup life is like: it always feels like time flies.

Why did you decide to start your own companies rather than follow a more traditional route?

Marks: When I met my business parter in college.  He found our first investor, Steve Wynn, who gave us $50,000 to start our first company.

Liu: A combination of several things. First and foremost, you get to choose to do something that you find meaningful and impacting. Second, the opportunities you get as an entrepreneur are magnitudes greater than any other occupation I can think of. As a young entrepreneur, you get introduced to mentors and successful entrepreneurs on a daily basis who want to help you. You get to learn everything from marketing to sales to accounting to business development to being able to make pretty websites and graphics. Everyday is also unpredictable. Earlier this year, I slept on the floor in our startup house, in the Langham Hotel in London, on a Greyhound bus, and then on a first-class flight on United all within the same week. Basically, I wanted to start a company so I could live life on the edge without having to be a drug dealer.

What does a day from start to finish look like for you?

Marks: Many meetings with founders to help them find investors and resolve strategic issues.

Liu: I wake up at 6am and spend about half an hour reading through emails and starring the ones that I need to reply to when I get to the office. I use another half hour reading news. Then, I get to the office about 7:30am. From 7:30 to 9:00am, I’m meeting with my 4 other co-founders and going over if we’re on track to meet our goals for the day and week. Depending on the day, there are different department meetings between 9:00-10:00am. Then, I’m doing emails, accounting, HR, writing proposals, interviewing potential hires, and other random tasks until noon. I usually have lunch meetings where I’m meeting one-on-one with teammates, investors, potential business partners, or just interesting people I want to learn from. Afternoons are spent working in the office. On many evenings, I go to dinner with similar people to those I meet with for lunch. Then going back to do more work. We’ll end the day at the office playing ping-pong. I’ll go to bed around 1am and read for an hour or so. Currently, I’m reading The Emperor of All Maladies.

What kind of problems do you deal with?

Marks: Mostly finding the right kind of investor who can help the startups.

Liu: There are many, but I have not encountered a problem in our business that cannot be overcome. For example, it’s always tough deciding which person out of an excellent pool of candidates to hire or what software features our team should focus on for the next month. But, the most difficult problem is after dinner every night when I decide whether or not to eat dessert.

What is your vision for the startup landscape in Los Angeles over the next several years?

Marks: I think we are in the first inning of a great run.  LA has the talent base to build a top technological city.  We have Elon Musk and many more luminary investors.  I am not surprised that Snapchat is LA based.  It was long in coming but it shows you that we can build great companies.

Liu: I think Los Angeles is going to be one of the best places to start a company, if it isn’t already. I’ve seen it grow tremendously in just the short year and a half that I’ve been here. When I first came to LA, there was only a handful of incubators or accelerators. Now, they are popping up everywhere. LA’s startup community is one where people are very helpful to one another because they want to see LA grow to be a startup haven.

Are there any parts of college that you felt especially developed you and prepared you well for life in startups? If so, what were they?

Marks: Mostly it was in understanding how software is built.  The rest of my skills were developed while I was learning how to build businesses by being an entrepreneur.

Liu: I started a number of companies and techie projects in college, which certainly helped me prepare for a full-time startup life. When you screw up a business in college, people are pretty forgiving. I certainly messed up a lot with companies I was building-I’m just glad that I learned the rookie mistakes while I was in college. I was also fortunate enough to be a part of many campus organizations. For example, Delta Sigma Pi business fraternity made a huge impact. The organization taught me how to build culture.  DSP showed me how to create a nurturing environment where people make sacrifices for each other and there is strong sense of brotherhood. In a startup, it’s very much like being in a fraternity. You’re constantly sleep deprived and toiling away at every waking moment, but at the same time, you have a blast living that kind of life together with your teammates. I’m also very thankful to have been a part of Berkeley’s student government. Berkeley’s student government is very intense and very much reflects what real-time campaigning and elections are like. There are multiple political parties. There are campaign managers and campaign staff. Our political party had several hundred-campaign staff. It’s a year long campaign process. This sounds cheesy, but going through the process of running for Vice President truly tested me mentally, physically, and emotionally. Then, serving as Vice President was one of the most humbling experiences of my life. I had to learn how to work with people who disagreed with me, people who questioned my every move, and people who just simply did not like me. It was a hell of a learning experience and I’m thankful for every minute of it.

If you had to share one piece of knowledge with budding entrepreneurs, what would it be?

Marks: Hire the smartest people you can find.  Have a real mission that you can follow.  Follow your heart and passion.

Thank you both for your time.