The Book of Life is a new film by Jorge Gutierrez and produced by Guillermo Del Toro. The film revolves around Manolo, a hero who sets out to three magical worlds to help him face and conquer his fears to fulfill his parent’s wishes and win the heart of Maria, his one true love. Featuring high-profile voices of Channing Tatum, Zoe Saldana, Diego Luiz, Ron Perlman, Ice Cube and Christina Applegate. 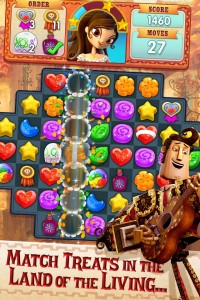 “In general, our company relationship with Fox has always been very, very strong. When this opportunity came up, we absolutely have always loved Guillermo Del Toro and his work and Jorge Gutierrez one of the best creative minds in the world for beautiful, out-of-the-box animation. So, we were very, very excited to work with them on this property and create, what we think, is the best casual game in the world,” says Josh Yguado, Co-Founder and COO of SGN.

Using a free-to-play system, The Book of Life: Sugar Crush offers players 90 levels of puzzles and features the voices from the movie. SGN will also release new content every two weeks for the game. The game is a match-3 mobile puzzle game to appeal to both the casual and hardcore gamers with the look and feel of the movie.

SGN is no slouch in the mobile gaming industry. They have created a handful of successful games on iOS, Android and Facebook platforms with hits such as Cookie Jam and Paint Monsters.

Yguado says, “SGN has been around for five years. We founded the company on the premise that we should build a game once and distribute it across all platforms: mobile, social, web. We have acquired five studios in the space and we started producing on our new platform as of about two years ago. Since then we have grown significantly.”

The popularity of video games such as 먹튀검증, especially the mobile gaming sector, exponentially increased over the years. Movie studios and game developers have been collaborating since the 80s. Video games are reaching Hollywood’s revenue records and are showing no signs of stopping. More companies seek gaming as a way to market new brands to reach new audiences and keep current customers. 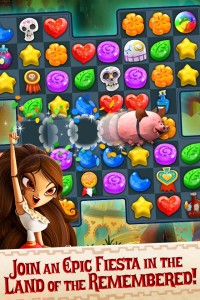 “There’s actually twice as many video gamers in the world, then there were seven years ago. Many people never considered themselves gamers before, have become gamers. People who never bought a video game console have an iPhone or have an Android device or have an iPad, which are so perfect for these types of iPhone games or iPad games. As a result, the general audience is really, really becoming gamers. It’s wonderful for us because many people who have never played video games before, and maybe even now, never considered themselves gamers are becoming gamers and finding games they love. I think puzzle games in particular and casual games more generally, are games that are very accessible to new gamers because they are very easy to learn. And on the other hand, even if you are an advanced gamer who loves huge platformers and gaming your whole life, you can still get a lot of delight out of these casual puzzle games,” says Yguado.

Fox Digital Entertainment and SGN’s new game, The Book of Life: Sugar Rush, markets to new audiences and shows the powerful collaboration of two giant industries. Movie industries cannot over look the popularity of mobile games. These industries compliment each other in a lot of ways.

“It has so much to do with really accessibility in devices and if you think about it. People who invest hundreds and hundreds of dollars in a console that’s tied to their television, they have to play in their living room versus now where everyone has a mobile phone and everyone can easily download a game and you don’t necessarily have to sit down and play for an hour. You can have a very fulfilling session in two or three minutes. It’s just made it so everyone can play video games. We like to say, it’s sort of democratized video gameplay and have a game accessible in a matter of minutes.”