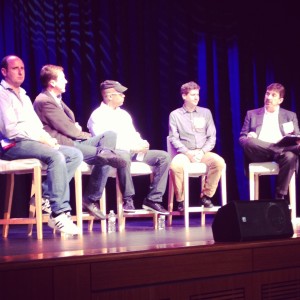 Over $50,000 in prize money. Big crowd of entrepreneurs, professors, students, and established professionals. Filled with innovation. All in a room at the University of Southern California Silicon Beach Event on September 18th, 2013. As one of the organizers, Jay Tucker explained, “The Silicon Beach movement is the future of the Los Angeles tech area – tech, mobility, digital content, entrepreneurship, etc. I wanted to connect LA’s incredible entrepreneurs with the larger business community and with the resources of USC.”

The second annual USC Silicon Beach event, hosted by the four professional schools at USC, featured a pitch competition and a conference filled with informational panels and interviews. With the promise of $25,000 for the top team, the pitch contest attracted over 60 teams, featuring competitive teams comprised of USC alumni, graduate students, and undergraduate students.

Only 8 teams were chosen to pitch in the finals on September 17th. These innovative products ranged from digital comic books to sports data analysis. In the end, 3 startups were awarded prize money for their spectacular business ideas.

Sellbot, an e-commerce platform for sellers made by USC graduates Michael and Payam Ahdoot, took home the grand prize of $25,000. Sellbot helps online sellers sell through multiple platforms. Michael said, “We feel that our concept is validated and that we will have good traction moving forward.”

Pelv-Ice, founded by USC MBA graduate Jill Bigelow, won third place and the $10,000 prize. Pelv-Ice is a pelvic support device for post-partum mothers and a recent winner of the Accelerating Innovating Mentoring (AIM) 2013 incubator and pitch competition. Bigelow stated, “AIM was a very similar contest. I got feedback from the pitch I did there. I tried to treat it as a learning experience and refined my pitch for this competition.”

The conference itself was focused on innovation, technology, and startups. After a brief introduction from David Belasco, an MBA professor at the Marshall School of Business, and Jay Tucker, Chief Marketing Officer and Interim Director of the Institute for Communication Technology Management (CTM), Gerard Tellis, director of the USC Center for Global Innovation began his talk about “unrelenting innovation”, asking people to embrace failure. “It’s human nature, we never get it right the first time.”

The conference was filled with a several panels. The first of these panels was moderated by Viterbi Professor Ashish Soni, the Founding Director of Viterbi Startup Garage. Soni interviewed a panel of entrepreneurs that represented SoundSpectrum, MediaHound, AIO Robotics, and GymFlow about their technology, startup process, and future steps.

Tucker led the next panel on the topic of mobility in the startup revolution. In this panel, Karen North, Director of Annenberg Program on Online Communities, commented, “The mobile game-changer is putting all of us in the real-time world, in the immediate moment.” The panel, which also featured Andrew Thomas, co-founder of iDoorCam, and David Anderson, Counsel at Edwards Wildman Palmer LLP, and Mark Young from NBC went on to discuss privacy issues, how mobile has changed relationships, and even public policy.

The afternoon began with a fireside chat with Albert Cheng, the Executive Vice President and Chief Product Officer of Digital Media at Disney/ABC Television Group. The interviewer, David Cohen, Senior Editor of Features at Variety, led the chat by asking Cheng about the media industry, advertisements, and the future of the market.

“Consumers do want ads, but they want them to be relevant and entertaining,” Cheng explained. On the topic of the future of the market, Cheng predicted that big data would be next: “The next wave is going to be less sexy, because it is going to be focused on things the customer can’t see.” 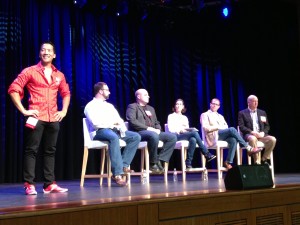 The event ended with three final panels. The Hollywood Meets Silicon Valley panel came next and featured a heated discussion between a former employee of Netflix and Fox representatives. Kevin Winston, founder of DigitalLA led the Silicon Beach 101 panel, which gave startup advice to all the entrepreneurs and future entrepreneurs in the audience. In this panel, Jason Corsello from Cornerstone OnDemand proclaimed, “Passion is key.” The panel “The Art of the Deals” closed out the night with a discussion about startups and deals.

All in all, the event served as a great informational resource and networking opportunity for educators, innovators, entrepreneurs, and students alike. Matt Tsai, a senior at USC, said, “The event was an awesome time to network and share ideas and get feedback on it from other entrepreneurs who have far more experience than I do.” Jill Bigelow, an MBA graduate from Marshall who took third place in the competition, stated, “It was great to be back on campus. The event itself was amazing. Great to hear about what’s going on and how cutting edge USC really is.” Michael Ahdoot, the competition winner, claimed, “LA is growing like crazy in the tech world. Entrepreneurship here is going to take down Silicon Valley very soon. It’s just a matter of time. USC is doing a great job staying ahead of the curve.”

Jay Tucker concludes, “What makes this special is the ability to get true game-changers like Disney’s Albert Cheng candidly sharing their ideas in an open forum. We had entertainment executives exploring (and arguing about) future business models and local and state policymakers sharing their view on the tech revolution. Most importantly, we celebrated and supported that innovation by awarding over $50,000 to startups!”