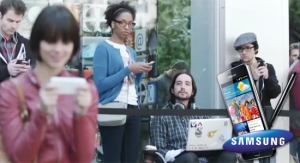 It’s no mystery that smartphone competition is higher than ever, especially with the holiday season creeping up on consumers all over the nation. Samsung has brought the fight for consumer attention right to Apple’s doorstep, using the long-lines and “unrecognizable upgrades” as targets for their Galaxy S II brass-knuckles boxing approach to marketing.

The most interesting point about this commercial is the subtle details in representing what an iLine would look and sound like on  product release day. The seemingly accurate depiction of the topics that bounce around between patrons while they wait in the excessively long waiting lines for their precious products appears to be spot on — especially to someone who has never taken part in such a thing.

Ultimately, it really speaks to the customers that have never taken part in the Apple store-line phenomena, and have possibly judged it, even secretly. At the end of the day, this commercial is for them, and personally I think it worked.