Not just a new film, “The Cosmonaut” is a labor of love four years in the making, crowdsourced and created with a plan to test the boundaries of transmedia content distribution worldwide. The project was started by a group of young Spanish digerati called Riot Cinema Collective. Using the power of the Internet’s connected tools they are proposing a new film model from financing, distribution, production and user participation by fostering a hardcore community under a Share-alike Creative Commons license. This allows users to download, lend, re-cut or use the film footage to create new derivatives of the work. It’s ambitious, it’s genius, it’s innovative and it’s all going down May 14th worldwide on multiscreens, with multiple endings, live theatre troupes, and free streaming. It’s kind of a big deal. 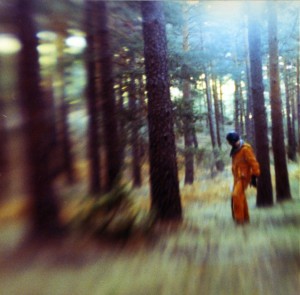 Directed by Nicolás Alcalá, “The Cosmonaut” is a sci-fi adventure love story depicting the space race between Russia and the U.S. told from a Russian astronaut’s point view. The film boasts being Spain’s first film made from crowdfunding from 5,000+ people and of one of the world’s most successful film crowdfunding campaigns (at the time) collecting over €300,000. Not too shabby. It only cost 2 Euros to become a producer and was influenced by other epic projects including “Artemis Eternal” and “A Swarm of Angels.”

It doesn’t end there. Their creative marketing and fundraising techniques included posting detailed business plans, an indie concert held in Madrid called CosmoNauts, a flashmob, video diaries of the process and they posted a pdf of the script online for remix. They want it all hacked and mashed up. Their site beckons, “Download our business plan, and find out our strategy to turn the film industry upside down.” Radical transparency is the goal and on May 14, 2013 the filmmakers will post the entire feature-length film online in HD (for free), in addition to releasing it on DVD/Blu-ray, on TV, and in theaters simultaneously. Transmedia elements in the works include alternate reality games (ARG), mobile apps, webisodes and whatever else the fans come up with.

There will be a smattering of special screenings worldwide. Fans are encouraged to create screening events via Tugg and to add interesting elements — like costume parties or Google Hangouts with the director. Transmedia Club LA’s director Hal Hefner has arranged a private screening May 15th at the Downtown Independent Theatre at 7:30 pm with after party.

Riot Cinema Collective’s mission statement reads “We were born from the idea of bringing cinematic language to all possible fields, as we were convinced that “in cinema to crash a car you don’t need a car, nor a crash, or a million dollars”. We like advertising, fiction, documentary and that they now call “new media” (we are particularly good at creating transmedia content to expand a centerpiece). Above all, we love to tell stories.” Should be pretty awesome!