The Internet Accelerates Everything | The Global Human 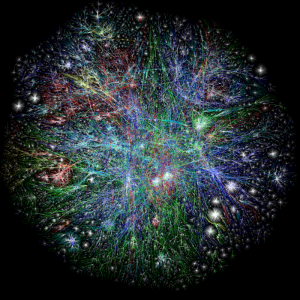 Commerce and trade are fundamentally based on exchanging asymmetries in one another’s ability to produce value at a given cost. As such, commerce intrinsically creates mutual value. That’s why it works. Moreover, the option to trade with more parties creates more value by fostering larger volumes of and more competitive trading.

Because of this, capitalism is infectious and self-reinforcing. As countries trade more, they create more and desire more value, which encourages more trade (not unlike Facebook and sharing). That explains why, in less than 250 years, capitalism has become the dominant socioeconomic system across the globe. Not only does capitalism govern economics, it heavily influences social norms and politics.

Of course, there are physical and geographic limits to trade. Analog and digital technologies have amplified capitalism’s viral growth by connecting more people to trade more frequently. Through the first 200 years of capitalism (starting symbolically in 1788), capitalism spread through analog channels: boats, trains, bikes, cars, airplanes, etc. The Internet changed everything. The Internet dramatically accelerated the proliferation of capitalism by opening digital channels to exchange information.

The Internet accelerates everything: e.g. the spread of social norms, news, political trends, business practices. For example, I recently learned that Waze (which Google just bought for a cool $1B) mapped the entirety of Costa Rica, a country in which it had no operations or expertise, in under 3 months. That’s remarkable. They mapped an entire country literally without trying.

The Internet also accelerates the fall of institutions, both large and small. Perhaps my favorite example of this over the past few years was Chat Roulette – I’ve never seen a business rise and fall so quickly. There’re any number of number of businesses that have succumbed to the Internet’s volatility: Zynga, OMGPOP (which Zynga infamously acquired), Groupon, Foursquare, Yelp, and Pandora, to name a few.

Yet, there are some processes that the Internet hasn’t digitized. Many businesses, particularly high-touch, people-centric businesses, still require large swaths of people doing stuff in a specific locations.

Why hasn’t the Internet digitized these functions yet? Is it a matter of time? If so, what’s the tipping point? What if we could digitize, accelerate, and reduce the cost of these services? How would we do it?

The simple answer is to digitize the human. Turn him / her into a computer. This is, of course, artificial intelligence (AI), and it’s the most radical approach to solving the problem. I strongly believe in the long-term prospects for AI, but, in the short to medium term, it’s probably safe to say that AI won’t replace people. 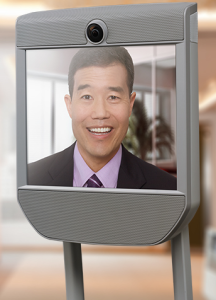 So, what if we could just put a cheaper person or object on the ground, and send in the high-touch person? Beam is attempting this by what amounts to gluing an iPad to an engine and set of wheels. The obvious problem of course is that many people might be turned off by the Beam. It’s anything but graceful and agile.

Eyeware computers such as Google Glass present another solution to this problem, and in fact provide far more flexible and robust experience than the Beam, though at the cost of labor. Remoting into another person through the first person camera, like the Beam, allows one to be anywhere, but unlike the Beam, preserves millions of years of evolution – walking and running, agile turning, flexible neck, opposable thumbs, etc. Although Glass can digitize the thumb, it can’t digitize dexterous hand motions.

As eyeware computers evolve into brain-controlling contact lenses and social norms and ethics adjust (if ever), perhaps we’ll be able to be anywhere, anytime through the Internet

It seems as if the global brain is a bit narrow in scope. Perhaps the Internet can be more broadly thought of as the global human.