Trojans and Bruins Battle on the Startup Field 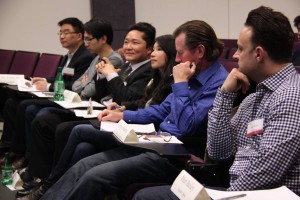 It isn’t the biggest secret that the University of Southern California (USC) Trojans and the University of California Los Angeles (UCLA) Bruins aren’t the best of friends, especially on the football field. On Sunday, March 2nd at USC, these rivals took their battle to a new platform: startups.

With the help of co-hosts and partners, including Bruin Entrepreneurs, Start-up UCLA, USC E-Club, Incubatrix, and more, Wowfand was able to put together the first startup rivalry to decide the dominant startup school in Los Angeles. Darren Gao, the event organizer from Wowfand, stated, “I put on this even not only to promote wowfand.com as an international fan funding website, but also to support student startup projects in Southern California.”

The competition started early February with a voting and crowdfunding portion as several teams from both schools gathered votes from fans on the host crowdfunding platform. Votes came from both the teams’ network as well as natural visitors to the website. Wowfand generously donated money to the teams with over fifty votes and the top eight teams qualified for the pitch that happened on March 2nd at USC. Talent Trail, a startup from USC that does matchmaking for recruiting, dominated the voting portion with over 500 ratings.

The pitch competition was split into two categories, a technology and nontechnology section. Each team had 5 minutes to pitch their idea followed by a 5 minute Q&A period with the prestigious judges, which included entrepreneurs, professors, investors, and technology experts. The pitches, which involved beautiful pitch decks and well-rehearsed speeches, covered companies working in bitcoins to ecommerce to beverages and more. At the end of the event, the judges crowned the winners.

Enrou, an online one-stop-shop for consumers to buy products from socially conscious brands from UCLA took the grand prize as the top startup in the Los Angeles startup rivalry. Ann Wang, from Enrou, stated, “We wanted to get immediate feedback about Enrou from the great panel. Pitching is a unique chance to practice our presentation and passion, but also get real world feedback from people from various backgrounds.”

In the end, UCLA came out victorious in the startup rivalry, taking 3 out of the 5 awards. All in all, the contestants had a lot fun representing their schools and working on their companies. Justin Boogaard, from Ark Broadcasting, explained, “It was a great opportunity for Ark to practice our “image” in a low risk environment, while still delivering a substantial reward. We were able to get some killer feedback that helped us refocus and build up some of the areas we were weak on. All in all, 100% worth the effort that went into it.”

Gao, the event organizer, said, “The competition in overall went pretty well except that we could have drawn more attention and attendance to this event because indeed it was an startup event with high quality and a truly fascinating theme.” Jessica Willison, from the winning company, Enrou, put it nicely: “What’s great about this pitch (UCLA v SC) is that both schools – despite our bitter rivalries –have such talented students & alumni who have great ideas to offer our world.”